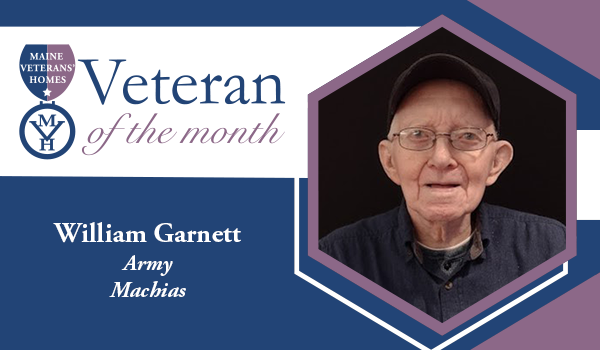 A caring steward of his family, church, and community

William “Bill” Garnett was born on January 28, 1929, in Jonesport, Maine. One of nine children born to Helen and Clarence Garnett, Bill had four brothers and four sisters. He finished school in his 8th-grade year to help his parents financially with their large family. He worked as a logger with a work horse to pull his felled wood through the Maine woods. He worked in road construction for the Maine State Department of Transportation and then joined the Army in 1951. His original orders included being stationed in Korea. Instead, Bill was sent to Germany, which pleased him, as it was a country he was interested in but had never traveled to before. Bill met his wife, Margarete (Dobbins), and married on December 31, 1955. They had four daughters, Joyce, Jane, Joline, and Julia, and two sons, Gerald and Glenn. They have ten grandchildren and nine great-grandchildren.

After his time in service, Bill worked in building construction. He worked on projects that included the Camden National Bank and the Coast Guard base housing, both of which were constructed in his hometown of Jonesport. He also worked at the Bucks Harbor base. His favorite pastime was being outdoors. Hunting, cutting wood, racking blueberries, clamming, and working in his vegetable garden were all activities he enjoyed. He also owned two thoroughbred horses and a quarter horse, not for work but purely for pleasure. When he wasn’t working, or with his family, Bill spent time as a member of the American Legion and volunteered in his church, doing small jobs. Bill was a parishioner of the Bay Chapel / Congregational Church in Jonesport. Bill says that he is most proud of being an honest, hard-working person. “I helped take care of my family when growing up and also took care of the family I made.” Today, at Maine Veterans’ Homes Machias, Bill enjoys music and social events, as well as cooking and watering the outdoor flowers. He is usually first in line if the MVH Van is ready for an outing!