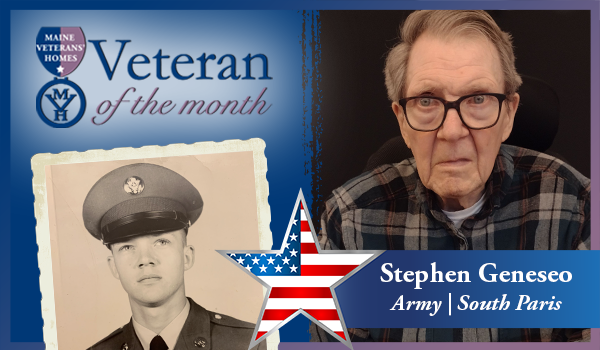 A Radio Operator Who Lived Off the Land

Stephen Geneseo grew up in Milford, MA, on a farm with his two brothers, Louis “Red” and Gerald. Stephen sadly lost his father when he was just five years old. The boys worked together tending vegetables and pigs, operating the family farm, and caring for each other and their mother. Steve attended Sacred Heart Catholic High School and enjoyed swimming in the nearby granite quarry in Milford. He enlisted in the Army directly after graduating from high school in 1960, following his older brother Red, who became a Green Beret in Vietnam. His middle brother, Gerald, was in the Marines stationed in Okinawa. Once the boys left for duty, the farm was sold.

Stephen completed boot camp in Columbia, SC, at Fort Jackson. Being in good shape from his years of farm work, Stephen found it comparatively easy. He was particularly interested in combat aspect training and artillery. Stephen was trained in radio operations at Fort Jackson, learning to intercept urgent communications as an intermediate radio operator. He first served in Germany in the early 1960s as the Berlin Wall was erected. He was directly involved in relaying messages to support battle at his Commander’s orders.

He met the love of his life, Annagret, at a dance hall in Germany. Annagret was from the Black Forest region of Germany, and Stephen recalls how beautiful she was, “She looked just like Snow White.” The two were married in both Germany and the U.S., as Stephen was still on active duty. Annagret’s family owned a florist and garden shop, and Stephen was very close to them, communicating despite speaking different languages.

Stephen’s service alternated between the Pacific Northwest at Fort Lewis, WA, and Germany for the next several years. His skills in radio transmissions were continually cultivated. He received advanced training in crystal diode “Cat’s Whisker” radio technology, even repairing delicate radio crystals.

Once leaving the Army, Annagret and Stephen moved back to Maine together, settling in Harrison and living off the land. The woods of Maine felt familiar to Anne and also her German family, who visited a few times and marveled at Maine’s “Forest and beauty.”

Annagret worked for the Singer Sewing Machine Company, whose machines were German-made. Stephen worked in retail, and eventually owned his own gun shop, named the “Sweden Trading Post.” The Trading Post allowed him to expand his love of the outdoors and interests, including hunting and fishing, archery, and camping. He retired from the trading post at the age of 75 and focused on trout fishing.

Annagret and Stephen had one son named William, who resides in Harrison.