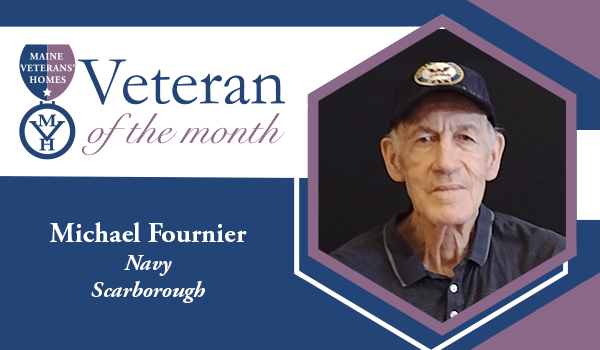 Michael Kern Fournier was born in Farmington, ME, attending primary school and junior high school. His family later moved to South Portland, where Mike graduated from high school in 1965. He worked for the First National Grocery Store during and after high school. He took some drafting courses at Southern Maine Community College, an interest that would pay great dividends later in life. As a young man, he also discovered the game of golf at Willowdale in Scarborough.

Mike proudly enlisted in the U.S. Navy in 1966 and ordered to active duty in October of 1966 aboard the USS John Willis, a destroyer escort. He received his basic training and was stationed in Newport, RI. When at sea, he and his shipmates “harbored” in Penzance, United Kingdom, and Naples, Italy. One of his fondest memories of Italy was swimming in the Mediterranean one day and skiing in the Alps the next day! He also loved visiting Malta and crossing the Arctic Circle. Michael and his shipmates received an enormous plaque commemorating this journey. Mike was also awarded the National Defense Service Medal.

Mike retired from Active Duty in 1968 as a Petty Officer 3rd class, but then re-enlisted for two years in the Naval Reserve from 1969-1971. He attended the Naval Reserve Manpower Center in Bainbridge, MD. Mike often said being in the Navy was some of his best years. The Navy gave him a great sense of pride and purpose to reach his goals and move forward in life.

As a civilian, Mike worked for Cianbro Construction and Soule Glass Co. He purchased his own home in 1975, then remodeled much of it independently. In 1979, he married his wife Pat, a high school teacher from Rhode Island. In 1980, Mike and started his own contracting company, which he ran for 30 years. Mike and Pat dearly loved dogs and traveling, and being both an avid bowler and golfer, Mike always brought his golf clubs! He won many golf trophies through the years, including three “Hole in One” trophies.

In 2018, Mike became a resident of Maine Veterans’ Homes Scarborough and especially enjoyed the many road trips taken with his friends: fishing in New Brunswick, grooming horses in Gorham, apple picking, bowling, and Oceanside rides. He fondly remembers the beautiful dinners hosted by local restaurants to honor Veterans, where Mike would “run into” former customers, neighbors, and golfing or bowling friends.

Mike and Pat also loved Shelby, the unit's white Labradoodle ‘mascot’. They kept dog cookies for her in his closet, and she would wait in his recliner for a treat! Mike often said that the staff at MVH Scarborough went above and beyond to help him and other residents, and it touched his heart. Whenever he saw the staff busy in the halls at MVH, he would happily lend a helping hand by sweeping, shoveling snow, or pitching in with whatever help was needed to make their day a little easier. Just like he had taken care of his many customers throughout the years, he continued to take care of his MVH Home and friends with an open heart.