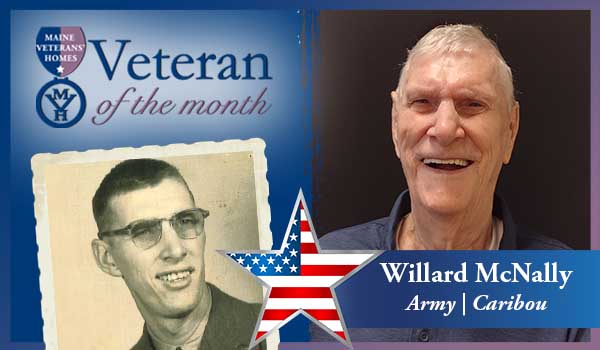 A Serviceman from the Maine Woods

Willard "Earl" McNally was born and raised in Sherman, Maine, not far from Mt. Katahdin. One of five children in the McNally family, Willard left school to work in the woods as a logger. He joined the Army in 1952, serving our country in Germany. In 1953, after leaving the Army, he returned to logging, purchasing his own logging truck and driving enterprise.

Earl married and raised a family of seven children, living in Benedicta, Maine. He taught his children to love fishing as much as he did, and the family would frequently go on fishing trips together. His children were active in sports, and Willard enjoyed watching them grow up, attending their many games and athletic matches.

A cheerful person by nature, Earl enjoys talking with his friends and fellow residents at MVH Caribou and having video chats with his son Joe.