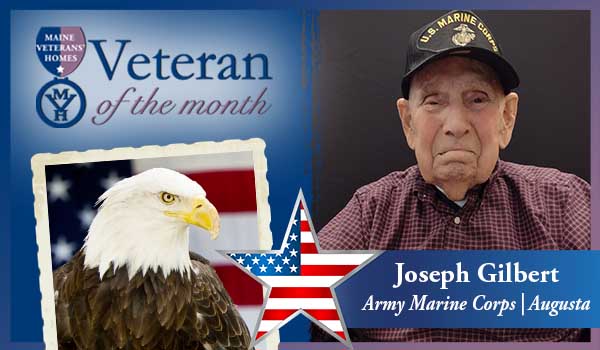 An Augusta Son Translates for Troops in Europe

Born and raised on April 23, 1927, Joseph Gilbert was one of nine children in the family of Aggie (Bonenfant) and Joseph P. Gilbert.

Joe graduated as First Boy of Class at St. Augustine Parochial School and graduated from Cony High School in 1946. Enlisting with the Army at age 17, He served in Germany for two years, working as an interpreter between French, German, and U.S. troops. His Army service was followed by two years with the Marine Corps during the Korean Conflict. Coincidentally, his brother Richard served in the Marines during the same period, also at the rank of Sergeant.

After serving his country, he was self-employed from 1952 to 1966 at Gilbert's Amoco Service Station in Augusta. In September 1954, Joe married his "little darling" Jeannine J. Turmelle, and they had a daughter and son, Joan and Gary. After the passing of Jeannine, Joe married Patricia LaFlamme in July 2001. In 1967 he joined the U.S. Postal Service, where he worked for twenty years, retiring in 1987.

He was a life member of Le Club Calumet, the Marine Corp League, and served 12 years as paymaster for the Young Marines of Kennebec Valley. Highly active in his community, Joe was a member of the Military Honor Guard, Marine Veterans Memorial Cemetery Association, and a Communicant of St. Michael's Parish at St. Augustine Catholic Church in Augusta.

A skilled marksman with a Community Heart

In 1962, Joe, his good friend Paul LaRochelle and other shooting enthusiasts started a shooting range in Paul’s back yard, holding competitions to raise funds for the eventual establishment of the Capitol City Rifle & Pistol Club North Augusta. He served as President, Vice-President, Treasurer, and Match Director. He was a member of the National Rifle Association, Pine Tree State Rifle & Pistol Association, International Benchrest Shooters (IBS), and the International Handgun Metallic Silhouette Association (IHMSA).

Joe was a 'crack shot' and ranks among the best in benchmark riflery. His honors include 60 state and nine national championships and 4 IBS of the Year awards. Even though the majority of his shooting prowess was accomplished after he turned 40, Joe enjoyed a shooting career that spanned more than 50 years. He also carries the honor of being the only benchrester to be named Shooter of the Year more than once.

In 1993, Le Club Calumet and the Maine Legislature recognized Joe for his accomplishments. Inducted into the Maine Sports Hall of Fame in 1996, Joe was an avid hunter, and in his later years, he also became an enthusiastic golfer.