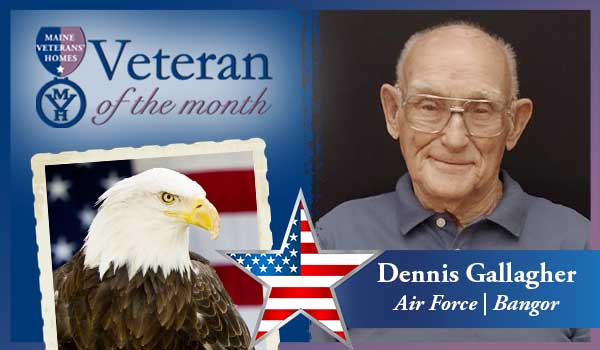 From the Foothills of Katahdin to Air Force Service

Born and raised in 1930 in Sherman, Maine (now called Staceyville), Dennis Gallagher left school at sixteen to work at a local lumber mill until he was old enough to enlist in the Air Force in 1949. A country boy from Northern Maine found himself right in the middle of a Texas heatwave for basic training at Shepherd AFB in Wichita, TX.

After basic training, Dennis spent time stationed in Rome, NY at Griffiss AFB, Westover, MA at Chicopee AFB, and Hickam Field, Hawaii for two years. Then, returning stateside, Dennis was assigned to Dover AFB (DE) as a sergeant with an aircraft engine mechanics specialty. Dennis said that the best thing about his time in service was the many lessons learned, including respect, camaraderie, loyalty, brotherhood, and a strong work ethic. “The military made me the person I am today…I used to be a hellion. But I learned, I learned to be respectful and respectable.”

A Father and Daughter Graduate Together

Dennis met his wife Annabelle as a child. The two grew up together and were married in 1951 while he was home on leave. After leaving the military in 1955, he returned to Maine, and the couple moved to Staceyville, having five children together; three daughters and two sons. Dennis worked as a log truck driver, cemetery sexton, Animal Control Officer, and mechanic for 22 years. He loves all animals, is especially fond of dogs, and proudly reports that he was never bit.

Having left school early 28 years prior for work and service to his country, he returned to graduate from Katahdin High School in 1974 at the side of his graduating daughter.

Dennis loves living at Maine Veterans Homes Bangor. When asked about what he likes best, he enthusiastically replied, “The Staff! They are always there to help. It’s a beautiful place, the food is great, I’m happy. I miss home, but they are my home now.”