Hollis “Hollie” Matthews was only 19 years old when his life would change forever.

On June 6, 1944, Hollie was one of the 23,500 American troops at Utah Beach, the westernmost point of the five beaches involved in the Normandy Invasion on D-Day.

In preparation for the 75th anniversary of D-Day, we caught up with Hollie at Maine Veterans’ Homes in Bangor.

An electrician and his boat’s radio operator, Hollie said their trip to Utah Beach didn’t get off to the right 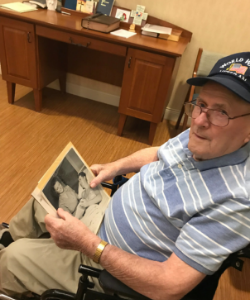 start. He was only given one day of training on being a radio operator and didn’t fully understand the directions he was being sent. After a little course correction, they got back on track and joined the American and Allied troops that set off to take the beach.

Hollie was part of a 13-person crew that day. As their boat approached the beach it came under heavy fire.

He still remembers seeing all of the many other boats approaching the coast; he was overwhelmed by the planning that went into the mission. He recalls vividly the men on the boat with him, the moments that led up to the destruction of their boat, and the immediate aftermath as they tried to find and care for the injured.

They lost five of their 13 crew members that morning. Hollie himself had to be “fished” out the water and was injured so badly that healing required an 18-month hospital stay.

While he is proud to have served and been part of D-Day, he doesn’t consider himself a hero. While we may disagree with him, he wants everyone to know he considers the men in his crew and all those who were lost that day as the real heroes.

On this 75th anniversary of D-Day, we offer a special thank you to Hollis Matthews for his service.

At Maine Veterans’ Homes, our mission is caring for those who served. It is truly an honor to care for the men and women, like Hollie, who have served our country.