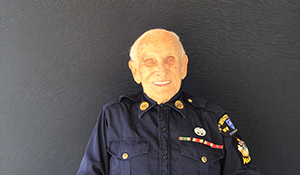 The youngest of five children, Earl Brown was born in Madison, Maine, to a paper mill worker and a homemaker. Early on, he had a passion for horses, which he would turn into a lifelong hobby.

Earl didn’t play sports as a student at Skowhegan High School: “Sports wouldn’t have me because I was too little,” he said, laughing, so he was the manager of the football team.

While still in high school, Earl was drafted into the Army, but “Uncle Sam was kind enough to let

me graduate before reporting to duty." He graduated high school in 1943 and completed basic training later that year in Oklahoma. In the Army, he was trained to be a medic, and served in Normandy and Czechoslovakia.

Letters from home were common for Earl while he was overseas, especially from his mother. “She was mostly blind, so Dad would need to dot her I’s and cross her T’s.” Earl served three years in the Army and said the most exciting place he had visited was the Eiffel Tower.

After the military, Earl returned home and worked for seasonal restaurants, which he loved, because of the Maine summer heat. Later he secured a job as a dairy herd improvement inspector, where he tested the milk from cows at farms throughout Central Maine. He had the same career for decades until his retirement at the age of 65.

Earl always made time for horses and adored his two Appaloosas, Jack and Danny Boy. He was an active member of the Maine Trail Riders Association and served with the Maine Horse Association as a ringmaster at shows.

Earl feels privileged to have attended an Honor Flight to Washington, D.C., at the age of 92, where he saw many military memorials, including the World War II memorial. He was accompanied by his friend, Nancy Weeks on this trip. Since Earl was able to graduate with his class in 1943, he was also able to gather with eight of his classmates in 2018 to celebrate their 75th class reunion and catch up with each other.

Earl has always loved polka music, and while he says his stamina isn’t what it used to be, he still manages to circle the floor a few times, bringing him back in mind and spirit to younger years.

Earl Brown, now a resident at Maine Veterans' Homes - Augusta, is the Heroes Calendar Veteran for January. Thank you for your service, Earl.