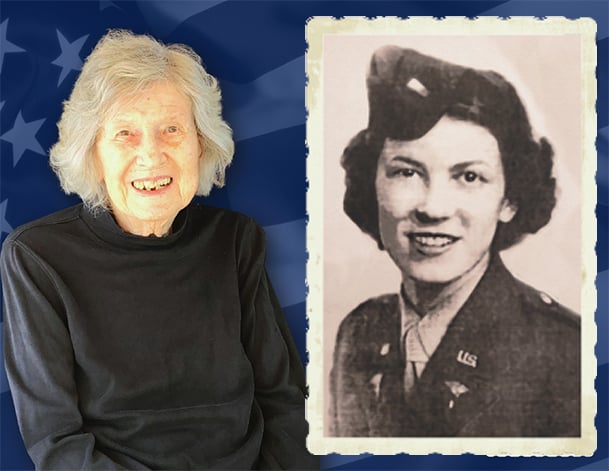 Young Nurse Had to Convince Military To Let Her In

Born and raised in Buffalo, New York, Evelyn Bovie is the middle child between two brothers. While her mother stayed home to care for the home and children, her father was a control manager at an area GE plant.

In 1945, upon graduation from nursing school, her desire to serve was so strong that even her petite frame would not stop her. At only 94 pounds, she didn't make the 95-pound cutoff, so she convinced the folks processing her Army intake papers to lie and say she was 96 pounds.

After a brief military training, Evelyn was stationed in New York, where she used her nursing skills to care for wounded service members who were injured overseas during World War II. While she cared for many people, little did she know that one of them would change her life forever.

She took care of an Air Force pilot, Verne Henry Bovie, who was shot down on Dec. 23, 1944, in his B-26 over Germany. He was a Prisoner of War at two German camps. When the Russians approached the German POW Camp, he and his fellow prisoners were forced to march all night long toward a new location. With the Russians closing in, the Germans left the prisoners behind, and upon their rescue, they were transported back to the U.S. Caring for Verne is how she met, nursed back to health, and eventually fell in love with her future husband.

After the military, Evelyn and Verne lived in New York, New Jersey, Michigan, and finally settled in Springvale, Maine. Evelyn continued to work as a nurse at Goodall Hospital in Sanford and Nasson College in Springvale. It wasn’t long before the couple started a family; they have four children: Deborah, Christopher, Martha, and Jennifer, and several grandchildren.

When she wasn’t busy working and raising her family, Evelyn enjoyed painting, skiing, and Bridge – though she said she wasn’t the best player. Evelyn worked for 28 years as a nurse in Maine, caring for others and doing what she loved.

Evelyn Bovie has been named the Heroes Calendar Veteran of the Month for July from Maine Veterans' Homes - Augusta. Thank you for your service, Evelyn.