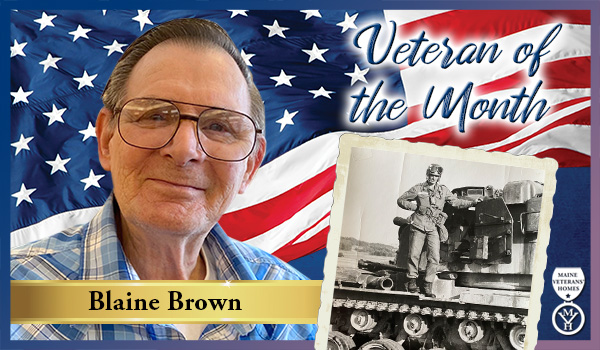 Army Veteran Has Always Had Passion for Cars

Lee, Maine, is what you would call a small town. For Blaine Brown Sr., the second oldest of his siblings, it’s home, and where he was raised alongside his three brothers and two sisters. Blaine’s father worked various jobs, and his mother worked for Forster Manufacturing Co. in nearby Mattawamkeag, making clothespins.

During high school, Blaine worked for his cousin on a farm, helping to support his family. As for hobbies, there was only one love - cars, both driving them and fixing them up.

“I had a ’55 Ford that fell through the ice when I was ramming around,” he said.

A car dealer friend came with his Army 6 by 6 to help get it out of the water.

Cars would go on to be a lifelong passion for Blaine.

Military Life and Beyond

In 1962, he was drafted into the Army. He completed boot camp at Fort Dix in New Jersey and then traveled to Oklahoma for continued training. In between his training on the East Coast and the Mid West, Blaine married his sweetheart, Marianne. After Blaine spent time in Oklahoma, he was sent to Germany, where he operated the 105 mm Howitzer Tank. He and Marianne had a son, Blaine Jr., and when his second second child, Elaine, was born, Blaine Sr. was serving in Germany. She was more than a year old when he finally met her.

“I was very happy to see her,” he said, adding that his wife had sent many photos of Elaine and wrote about her in letters.

After the military, Blaine and Marianne raised their family in Augusta. He worked as a carpenter for a contractor’s group that specialized in building large facilities.

Locals might recognize some of the projects he worked on: Dunkin Donuts in Augusta, Houses in Ganneston Park, and the Mormon Church in Farmingdale.

Get Veteran paperwork in order >>>

As a youth and into adulthood, Blaine’s passion for cars never wavered. With a lot of work and much love, he revamped a 1940 yellow Ford pickup truck in a period of two to three years. It included power steering and windows, air conditioning, and other upgrades. He’s incredibly proud of the work he completed, and the truck is now considered a collector’s item.

In retirement, Blaine enjoyed fishing for trout in Maine’s lakes and streams and hunting for deer in the state’s rich forests with his son and namesake. He also loves to dote on his two grandchildren and two great-grandchildren.

Now a resident at Maine Veterans’ Homes - Augusta, Blaine loves the food quality and choices and appreciates how Veterans are recognized and celebrated in the organization. Blaine Brown is honored to have been named April Veteran of the Month at MVH Augusta. Thank you for your service, Blaine.