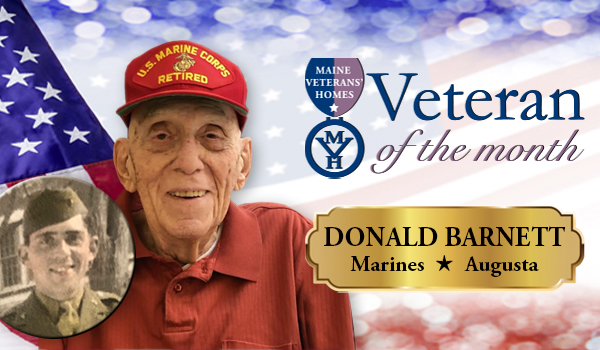 Forever a New Yorker, no matter where he happened to live throughout his life, Donald Barnett grew up in Washington Heights, located on the north end of the Big Apple. His father, Benjamin, was an electrician, and his mother, Frieda, took care of the house and tended to her only child.

When Don was six years old, his parents took him to Boston, hoping for better work for the Barnett patriarch. It was 1933, and Franklin Delano Roosevelt had just been elected president months earlier. A parade was held in the Blue Hill Avenue neighborhood of Boston to celebrate the country's new president, and the Barnetts were there watching.

"I got excited and ran across the street to (Roosevelt's) car," Don said. "This got his secret service agents all excited, and they moved in, but Roosevelt said to the agents, 'He's only a boy, what's wrong with you?"

Roosevelt stopped the parade, and as Don stood on the running board of the limousine, Roosevelt lifted him through the open window and into the car.

"He asked me where I was from and whatnot," Don recalled. "He says to me, 'You don't sound like you're from Boston.' I told him I came from New York and that there was no work there; that's why I was here in Boston living at my grandmother's house. We talked a few more minutes; he lifted me back out the window onto the running board of the limo and told me to go back to my family."

The parade continued, and Don was left with a story he'll never forget.

The family eventually moved back to New York, where Donald attended George Washington High School and New York University. While still in college, America's role in World War II inspired Don to join the military. He intended to enlist in the Navy. Other branches were present in the recruitment office, and the Marine Corps proved to be very persuasive. They needed to recruit ten men that day, and Don ended up being No. 10. Almost immediately, he was off to the Marine Corps Recruit Depot in Parris Island, South Carolina.

Life in the Military

After basic training, he and a group of men traveled to San Diego, California, by train. A lieutenant called the men out of the train upon their arrival for a message from the general.

"The general said, 'You are the luckiest men on the face of the Earth today. You were supposed to be in the first wave invading Tokyo,'" Donald said, adding that three days before, the U.S. had dropped the Atom Bomb, eliminating the need for the men to be part of an invasion.

The men felt fortunate and were sent back to their base.

Donald's travels while in the military were vast, but his favorite place was Puerto Rico. He fell in love with it; the people, buildings, and the culture.

Part of Donald's military service included training West Point cadets and Annapolis midshipmen in landing operations. He and five other men instructed the trainees on huge maneuver ships in the Atlantic and Caribbean. Donald taught them to jump down in barges and come up the side of the vessel. During one training session, Donald's feet were hanging over the side of the ship, and the waves got too high - they slammed into his feet, injuring him and forcing him into a military hospital for treatment. After the hospital, Corporal Barnett went home to New York.

After a year of service to the Marine Corps, Donald came home and worked as an electrician. In 1947, he and his best friend from the service, Dave Diamond, and four other men he was in the service with went into business together and joined the local electrician's union.

Also, in 1947 Donald married his wife, Lynn. They had met many years earlier when they were just 13 years old at a Jewish Temple in front of the Washington Bridge. Six months after their wedding, Don took her to Puerto Rico for their honeymoon. She, too, fell in love with the Caribbean island, and they vacationed there every February throughout their 35-year marriage. They have two sons, Mark and Kenneth. Donald later remarried to his second love, Harriet, and they were together for 25 years before she passed away.

It was Don's father who helped him get into the electrician's union in New York. It turned out to be an excellent move for Don and his friend Dave, as they had plenty of work to keep them busy.

One day, while Don was doing electrical work in an apartment building on 58th Street, he got a call from the union's business manager. He asked Don to let his assistant finish the job – he had something much more prominent in mind for Don.

"He told me to go over to the Empire State Building, so I did just that," he said. "I go up to the top, meet my new boss, and ask what I'm supposed to be doing."

It turns out that Don would install all the lighting atop the iconic landmark.

"People would say to me, 'Aren't you afraid to be up there, looking down?' What was there to be afraid about?" Don would quip.

He worked for the union for 45 years until he retired to Maine.

Now a resident at Maine Veterans' Homes - Augusta, Donald Barnett has been named June Veteran of the Month. Thank you for your service, Donald.