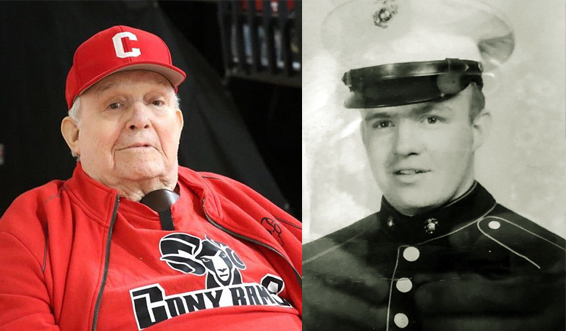 A Whitefield native, Charles Michael “Mike” McCormick spent most of his life in the Augusta area, except for the three years he served his country in the Marine Corps from 1968 to 1971.

“I saw Greece, Italy, Spain – gosh, I can’t even begin to remember all the places we traveled to,” said Mike.

Well before that, however, he enjoyed a childhood spent with his two sisters, attending St. Mary’s school where their mother was a teacher. Mike was even a student in her class, which he didn’t always enjoy.

“I asked to be put in another class and I was indeed moved,” he said, laughing.

Growing up, Mike played baseball and football for Cony High School. While he was skilled at America’s favorite pastime, he wasn’t so talented in basketball – just the opposite of his grandson, Simon McCormick, the Central Maine Boys Basketball Player of the Year. Mike’s daughter Kathy adopted Simon from Haiti, along with Simon’s brother, Maliki. Mike was proud to attend Simon’s games at Cony High School and was in attendance at the game where Simon scored his 1,000th high school career point.

Right out of Cony High School, Mike enlisted in the Marines and attended basic training in South Carolina. All Marines, he said, are trained to be infantry as their number one jobs. Further training for Mike included working on and driving trucks.

As Mike traveled the world as a young Marine, he wrote to his mother every week and she returned every one of his letters. He’d write home about the various countries he visited and the men with whom he served. A deployment to Beirut saw Mike and the others wanting for clean water. Beer, on the other hand, was in abundance.

“I didn’t write home about that,” Mike said, laughing.

After the service, Mike returned home where he secured a job working for the state, which was no doubt with some help from his father, who worked for the Maine Department of Health and Welfare. Before too long Mike set off on his own and studied as an apprentice plumber. After getting several years of experience under his belt with an existing company, he opened his own business, CM McCormick and Sons.

By this time, he had met and married his wife, Theodora, who he affectionately called “Teddi,” and they had seven children: Mary, Sean, Patty, Kathy, Stephanie, Stephen and Karen. Teddi is from Aroostook County so the family spent many weekends there, hunting and fishing.

Years later, Mike and Teddi would go their separate ways. Mike volunteered with the Coast Guard Auxiliary, whose mission is to promote and improve recreational boater safety. Mike found great fulfillment in his membership with the Auxiliary and its members.

Mike started attending a group for divorcees, widows and widowers where he met Mary, who would go on to be his companion for 30 years. The two cared for one another before Mary passed away about two years ago.

“She was a very, very nice lady. She had to be, to put up with me,” Mike said, laughing.

Now a resident at Maine Veterans’ Homes - Augusta, Mike has been named Veteran of the Month for June. Thank you for your service, Mike.

Maine Veterans' Homes is an independent nonprofit organization that cares for Veterans, their spouses and Gold Star parents. Veterans of all branches of the service are eligible for residence whether they served three years, like Mike, or an entire career. To learn more about what MVH has to offer, download our brochure and free Guide to Choosing a Senior Living Community >>>