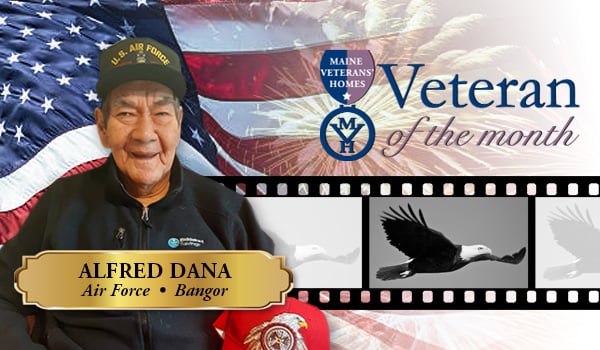 Veteran Grew Up On Maine Reservation

Born in 1937 on a small Sipayik Malecite-Passamaquoddy reservation, Alfred Dana is the oldest of three boys, all raised by their father. Located on Pleasant Point in Perry, Maine, the reservation is near the Canadian border.

Al and his brothers attended Sipayik Consolidated School and later Eastport High School before the family moved to Groton, Connecticut, in search of work.

At the age of 14 Al took a part-time job at the Naval Submarine Base in New London, Connecticut, as a dishwasher, where his father worked as a welder on nuclear submarines. In 1961, a military recruiting officer tracked Al down on the Abenaki reservation in southern Maine where Al had relocated and encouraged him to enlist. The then 24-year-old enlisted in the United States Air Force.

After basic training in Lackland, Texas, Al was stationed at Hill Air Force Base in Utah and later deployed to Ramstein Air Force Base in Landstuhl, Germany, where he lead a team of men called “Bomb loaders” who did exactly that; they loaded planes with ammunition and explosives and were responsible for all munitions, including nuclear weaponry.

Al’s team and other men in his unit would also fly to North Africa for training missions in which they would practice dropping and loading bombs and equipment while flying over the vast Libyan Desert.

After retiring from the military, Al moved to Taos, New Mexico, where he met his wife, Geraldine, and had four children. Al led mission trips throughout the Southwestern United States, serving as an addiction and substance abuse counselor. In 2016, Al moved back to Maine, where he found a group of like-minded people at Camp Etna, a Spiritualist Association in Etna, Maine. Al led a group of spiritual advisors at the Healing Light Spiritualist Church there, where he counseled those searching for direction.

Now a resident at Maine Veterans’ Homes – Bangor, Alfred Dana has been named July Veteran of the Month. Al can often be found playing Bingo, exercising, and socializing with both residents and staff. He always has positive words and a kind smile for whomever he meets, and most days can be found enjoying his coffee in the dining room with resident cat, George, curled up by his feet.

Thank you for your service, Al.