Air Force Veteran Goes On To Serve In Community Government

James Wentworth was born July 23, 1929 and grew up in Veazie, during an era that was shaped by the Great Depression and World War II.

A 1947 Bangor High School graduate, Jim worked for three years locally before moving to Portland to attend Portland Junior College. While there Jim joined the 104th AC&W Squadron of the Air National Guard and received formal training in food services.

In 1951, with the Korean War heating up, his squadron was activated and sent to Otis 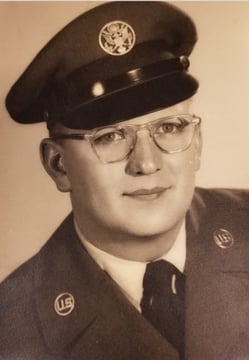 Air Force Base. They spent a year there before being deployed to Libya where Jim, now a trained cook, was promoted to lead the unit’s food services.

Jim feels fortunate to have gone to Libya instead of Korea as the conditions in Korea were not always ideal. While the squadron was safer, temperatures were very hot, however, and they had to deal with multiple sand storms. A perk of being stationed in Libya was the ability to hop on planes headed to Germany and Rome while on leave. He was able to take five trips this way and explore several European cities.

Service After the Military

As an Airman 2nd Class, Jim was honorably discharged in 1953. He took advantage of the GI Bill and earned a degree in Economics from the University of Maine in 1956. His degree and hard work ethic led him to a 44-year career in investments.

His love of Doris O’Leary led to a lifetime of happiness and two daughters, Ann and Susan. Jim was very active in community service. He was the very first chairman of the Veazie Water District and a long serving Selectman.

Now a resident at Maine Veterans' Homes - Bangor, Mr. Wentworth is our featured Veteran for April in our Hero's Calendar. Thank you for your service, Jim.

In addition to Bangor, Maine Veterans' Homes has five other locations throughout the state - Augusta, Caribou, Machias, Scarborough and South Paris. To find out if you or your loved one is eligible, download our free Eligibility Guide >>>