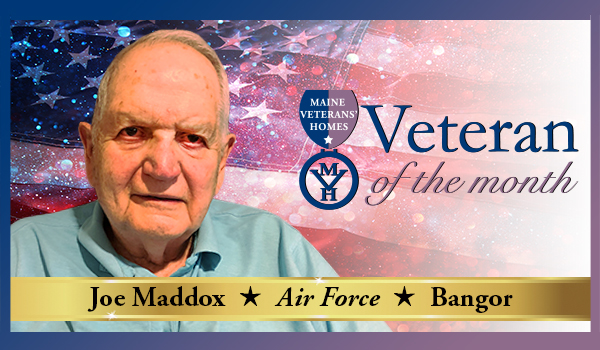 Born in Hardwicke, Georgia, Joseph Maddox and his family moved around quite a bit. When he was seven, they moved to West Palm Beach, Florida, then to Fort Myers until he was in fifth grade. Joe’s parents divorced, and he stayed with his father, who worked for the Louisville and Nashville railroad as a telegrapher, which meant more moving about the country was in Joe’s future.

“I knew nothing about being Catholic. Evidently, they thought it would straighten me out – but there was nothing wrong with me!” he insisted.

There was one little girl who thought it was funny to tattle on Joe.

“She would tell the nuns, ‘Joe is cussing,’” he said. “I was introduced to the nuns, and they introduced me to the rulers.”

By the time his high school years came around, Joe was living in Bowling Green, Kentucky. He played football at Bowling Green High School and was a pitcher on the baseball team. One month after graduation in 1948, he enlisted in the Air Force.

Joe completed basic training in San Antonio, Texas, at Lackland Air Force Base. He then went to aircraft mechanic school at Sheppard Air Force base, also in Texas. The Korean War had just started, and it wasn’t long before he was sent to Okinawa, Japan. He also served in Itazuke, Japan.

After serving in Maine he went to remote Alaska, where he experienced chilling -60 degree temperatures on a few occasions. He was in Fairbanks, Alaska, when an earthquake in 1964 rocked the area. The quake registered 9.2 on the Richter scale – the largest earthquake ever recorded in the U.S.

“We weren’t in the most affected area, but it was bad,” he said. “Chairs and tables were flying all over the place. Luckily, everyone was OK.”

Beyond the Air Force

After two decades in the Air Force, Joe went to school to become a flight facilities equipment repairman; he learned how to fly planes and served as an instructor. He said the best part about flying planes is the landings – “It’s a guide to know how good you are,” he said.

Not long after, Joe made a career change – he moved to Colorado and worked for 20 years as an engineer for television station KRDO TV in Colorado Springs.

“Twenty years of work, and I didn’t miss a day,” he said, adding that he took part in 10,000 newscasts starting from when television was in black and white to when it was first broadcast in color.

Joe has many hobbies: he once enjoyed long-distance running, was a “pretty decent” racquetball player, and was an extra class ham radio operator. In addition, he was the president of a computer club, wrote cartoons for a local newspaper, and has published two books.

“Save the Day,” published in 2002, is the story of identical twins, Joe and Bob Maddox, and their adventures as children and in the U.S. Air Force. One performs a heroic feat, while the other gets credit for it. Their adventures take them to the black markets of Turkey and Greece, in addition to escapades in love.

His next book, “Without Remorse,” was published in 2013 and is a suspense-filled tale of a woman who will stop at nothing to achieve her goal of accumulating wealth. The setting is in the Deep South, just before and during World War II, and continues to Alaska and its vast wilderness. The story revolves around a funeral parlor, a brothel, a Native American village, railroads, vintage airplanes, and a gold mine.

Joe doesn’t only excel in left-brain activities such as writing; he fancies himself a mathematician. He has easily solved a geometry problem known to be a difficult achievement – trisecting an arbitrary angle.

Joseph Maddox has accomplished much in life, and now he can add being named May Veteran of the Month at Maine Veterans’ Homes - Bangor. Thank you for your service, Joe.