Like many women in the 1950s, Joyce Swartz wanted to settle down to marry and have children. Before that, however, the Bangor native felt a calling that she couldn’t ignore. She wanted to serve her country.

An Opportunity for Women 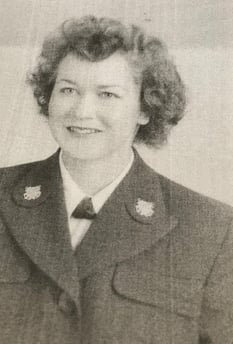 women into the reserve for the duration of the war.

The “boys,” she said, weren’t happy about women joining this branch of the military.

“The men saw the women taking their jobs and felt this caused them to be sent to war.”

Joyce’s two years serving in the Coast Guard were full of positive experiences.

She’ll never forget being on a train that was full of troops in uniform, from Boston to Florida, all going to boot camp.

“It was something you’ll never see again. It was quite an experience,” she said.

Joining the military not only gave Joyce a great sense of pride, it’s also how she met her husband, fighter pilot Francis Swartz, whom she married in 1953.

Her career after the military included work at Dow Air Force Base and the Justice Department. What she considers her greatest accomplishment, however, is that her children grew up to have professions they can be proud of and that they’re “good kids.”

Joyce Swartz, now a resident at Maine Veterans’ Homes - Bangor, is our Heroes Calendar Veteran of the Month. Thank you for your service, Joyce.

Sign up for your free Heroes Calendar, featuring Joyce >>>

In addition to its Bangor location, Maine Veterans’ Homes, a nonprofit organization, has Homes in Augusta, Machias, Caribou, Scarborough and South Paris. All of our Homes provide care not only to Veterans, but their eligible spouses and Gold Star parents. For more information, download our free EligibilityGuide>>>