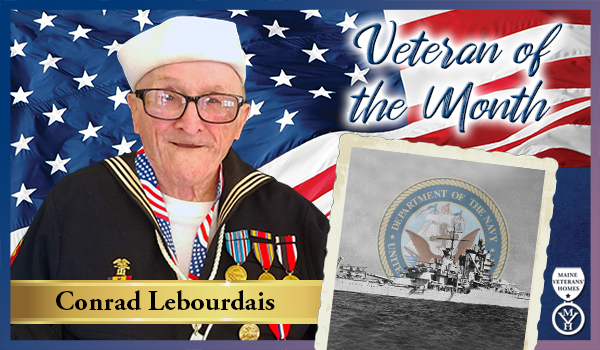 Navy Veteran Conrad Lebourdais was born into what one could call a small army – he was one of 18 children of George and Almina Lebourdais of Brunswick.

“My mother was a tough woman,” Conrad said. 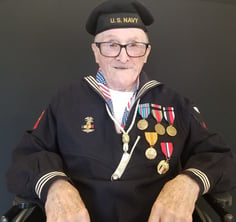 He was particularly close with brothers Fernand and Gerard, or “GG” as he called him. The boys worked to support the family when they were just children. Conrad would go out on the Androscoggin River in a rowboat to collect wood scraps to keep the family warm during winter.

Times were tough when Conrad was a child. It’s cliché for parents and grandparents to talk about how difficult it could be to get to school. However, it was a genuine challenge for Conrad and his siblings. They walked about a half-mile to their local Catholic school, and during winter, the children didn’t have boots, so they wore two pairs of wool socks instead.

In 1944 at the age of 17, Conrad enlisted in the U.S. Navy. He went to the post office with his father, as Conrad needed his signature to enlist since he wasn’t yet 18.

Conrad was sent to boot camp in Sampson, New York, which gave him his first glimpse of the Statue of Liberty. It was the beginning of an unforgettable journey where he’d come to witness military history.

Conrad traveled worldwide while in the Navy, including the Philippines, Spain, 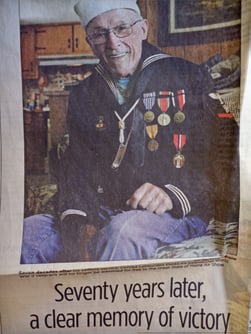 Okinawa, Hiroshima, New Caledonia, New Guinea, and Australia, transporting troops and supplies from ship to shore. It was more than 75 years ago, but he’ll never forget his time in the Pacific serving on the U.S.S. Medea. It was 1945, and the United States had just dropped nuclear bombs on Hiroshima and Nagasaki. A little more than two weeks later, Conrad watched with binoculars from the deck of the Medea as Japan surrendered during a formal ceremony on the U.S.S. Missouri, only 300 yards away.

He remembers the loud rumble of warplanes in the sky as the ceremony took place as if it were a warning from the U.S. to Japan.

“At least that is how I saw it,” Conrad is quoted as saying in a newspaper article.

In the days leading up to the ceremony, the Medea was ordered to Tokyo Bay, where Conrad remembers picking up a Japanese pilot who guided the ship through a nail-biting maze of mines planted throughout the bay. 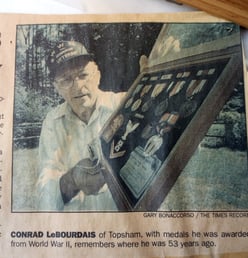 kayama, near Hiroshima. Conrad said it was rumored to be unsafe to work outside more than three or four hours a day due to high radiation levels from the bombing. Conrad and the others worked outside much longer than that and were never warned about the possible danger. At one point on shore, Conrad even walked to see the ruins of Hiroshima and believes that exposure caused a tumor that was removed from his arm 16 years ago.

The entire experience, from witnessing the aftermath of the bombs, to being present for the historic surrender, is a time that Conrad often recounted to local newspapers, friends, and family.

Conrad had a lifetime’s worth of experiences in the two years he served in the Navy. He was discharged on Independence Day 1946 and came home with several medals,

On May 30, 1951, Conrad married the love of his life, Marilyn, and they had two children, Norma and Daniel. Conrad joined the American Legion right out of the military. He and Marilyn’s most cherished pastime was to attend Legion dances on Saturday nights.

Conrad worked at the Cabot Mill in Brunswick and the Pejepscot Paper Mill in Topsham for many years until he retired at 67. He was happy to have more time to spend with his grandchildren, Peter and Gary, and three great-grandchildren, Dev, Marcel, and Audree. Sadly, Marilyn passed away in 1996.

Conrad also spent his retirement years fishing, hunting, as an active member of the American Legion, and repairing baseball bats. He often picked up damaged bats for a few bucks each at second-hand stores. He’d sand down any chips or dings and paste pictures from magazines on the surface. Once smoothed and glossed, he’d hand them out.

“Everybody and their brother has a bat from my dad,” said Conrad’s daughter, Norma, adding that even Sen. Susan Collins, Sen. Angus King, former Gov. Paul LePage, and Gov. Janet Mills own baseball bats that Conrad restored.

Now a resident at Maine Veterans’ Homes - Bangor, Conrad Lebourdais has been named Veteran of the Month. Thank you for your service, Conrad.