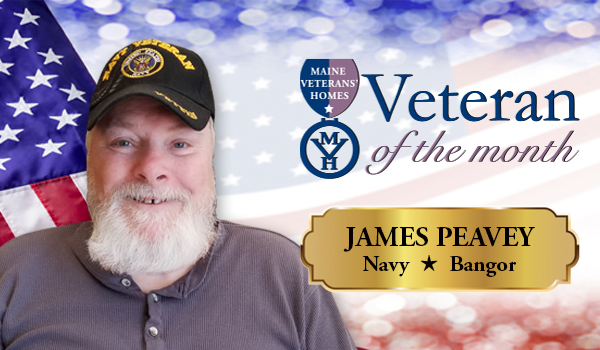 James Peavey and his four brothers and a sister grew up in Bangor, spending many summer days swimming in Tunk Lake at their grandparent’s camp. Their father, Henry, was a painter, and their mother, Elaine, tended to the home and the children.

They would spend the weekends playing – usually tetherball or basketball. James had no chores growing up, adding that his mother took care of everything.

James graduated from Bangor High School in 1972 and joined the United States Navy only days after. He figured it was a young person’s duty to serve the military, so he enlisted.

James was sent to Quonset Point, Rhode Island, on the USS Intrepid CVA-11 for a year and a half, where he was in charge of the boiler. After traveling over the Mediterranean for the same amount of time, James went on the USS Howard W. Gilmore AS-16, a Fulton-class submarine tender, for another year and a half. James said the ship was on the water for ten days and then in port for ten days while in the Mediterranean. He feels fortunate to have seen the world through his service; he visited Portugal, France, Italy, Greece, Gibraltar, Africa, and more.

After three years of service in the United States Navy, James left in 1975 with a rank of E3-Fireman.

Back to Maine, The Way Life Should Be

James then moved back to Bangor, where he worked for a year doing general labor for the city. Later, he worked at Georgia Pacific, a paper company in Old Town, where he worked as a machine operator for 37 years before retiring. James has two children, Carla Peavey-Mitchell and Heath Peavey. He also has three grandchildren, Lucas, Layla, and Paxton.

At the age of 50, James picked up a guitar for the first time; it soon became a favorite pastime. His brother, who played bass, suggested that he try the instrument to help with the arthritis setting in his fingers. It did the trick, and James found a passion for not only playing but collecting guitars.

He has 18 guitars, many that are 1 in 50 or 1 in 100, including a guitar with Eric Clapton’s signature and one from Carlos Santana. He’s particular to the Bourgeois brand of guitars. His favorite is a one-of-a-kind Bourgeois Guitar he bought, made out of  South American quilts mahogany with some Brazilian rosewood.

James spent much of his time hunting deer, partridge, and pheasant in retirement, or he was somewhere throwing a line in a river or pond catching brook trout, togue, and salmon.

Now a resident at Maine Veterans’ Homes - Bangor, James Peavey has been named June Veteran of the Month. Thank you for your service, Jim.