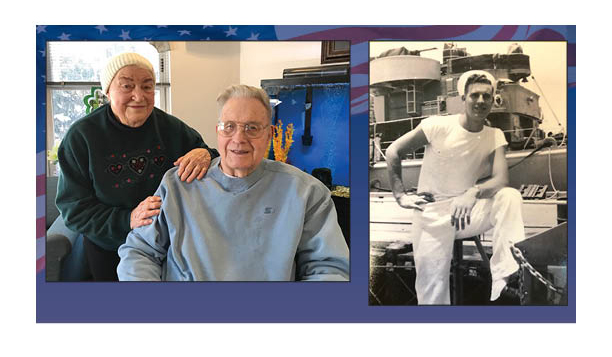 When Wayne and Lettie Kinghorn were in high school together at Washington Academy in East Machias, he was a baseball and basketball player; he was pitcher and played first base and was a center on the b-ball court. She, a cheerleader.

“He was a good shot. The crowd was always happy when he got the ball,” she said.

Though they’re the same age, Lettie graduated ahead of him because Wayne was held back in kindergarten. The family had moved from Downeast to Portland so Wayne’s father could work at the shipyards.

“He was held back so I always said I was smarter than he was and that’s why I graduated ahead of him,” said Letting, laughing.

In 1951 Wayne, 19, enlisted in the Navy before the military had a chance to draft him. He worked the USS Yellowstone, USS Smalley and USS Molloy as a radio man. Wayne was skilled at communicating with Morse code.

Lettie said her experience as the spouse of someone in the military was good; it was peacetime, so she didn’t worry about her husband being in danger. Also, when they lived in New London Connecticut, the Kinghorns met up with another couple from Downeast with whom they were close.

Wayne saw the world while in the Navy: Italy, Spain, the Virgin Islands, Cuba and more.

After five years of service, the couple returned to the Machias/Cutler area to raise a family: a son, Garry and a daughter, Carolyn. Wayne went into the insurance business where he remained for 30 years, though the stress did a number on his stomach.

“I told him it’d never be any different until he got out of that business,” Lettie said.

Kinghorns are Introduced to MVH

In 2017, Lettie needed to recover from surgery and found herself at Maine Veterans’ Homes - Bangor. After receiving the therapy services she needed, a nurse came to her room and said it was time for her to go – Wayne was going to take her place.

Wayne, who has been a resident at MVH Bangor ever since, is Veteran of the Month for March. Thank you for your service, Wayne.

Learn about our rehabilitation and therapy services >>>

Spouses are not only eligible to be residents at all Maine Veterans’ Homes locations, they are eligible for our therapy services. To learn more, download our free Rehab & Therapy Guide >>>