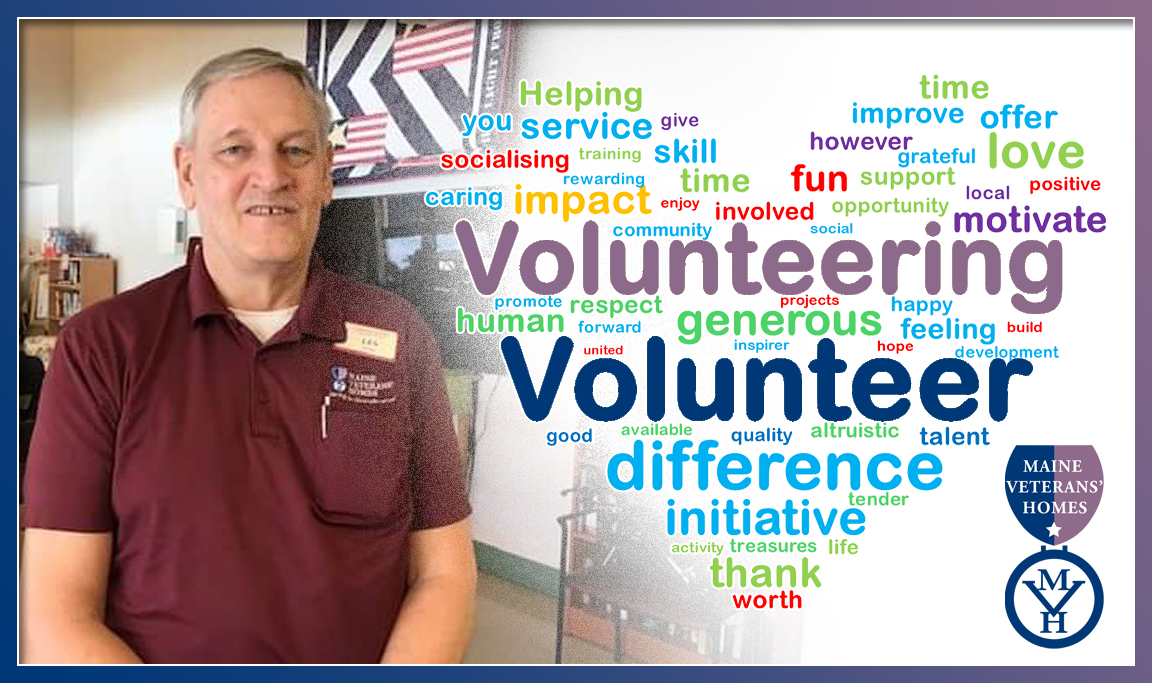 Volunteer Supports Veterans, Even During COVID

Les Shaw never imagined he’d find a place that felt like home when he learned that his father-in-law was to be a resident at Maine Veterans’ Homes - Bangor. After all, he hadn’t spent much time with older adults, and he only expected to be a short-term visitor. This was in 2013 and seven years later, Les is a fixture at MVH Bangor as a dedicated volunteer. At least he was, before COVID-19 restricted volunteers from spending time at the Home.

For years, Les has spent hours a week at the Home. Every Thursday, Les enjoyed making 200 bags of popcorn, earning him the nickname, the “Popcorn Man.” Often, however, he simply visited with residents and chatted, offering a familiar and welcomed presence.

Les hasn’t been in the Home since late February, and he misses it immensely. When he recently received his government-issued stimulus check, he gave half of it to the Activities Fund at MVH Bangor.

“I wanted to boost morale,” Les said, “I really miss them.”

Les donated the rest of his stimulus payment to another local nonprofit where he has done maintenance work.

Learn how to support Maine Veterans >>>

Les had accompanied his father-in-law to several nursing facilities before visiting MVH Bangor.

“He was blind and could only see shadows. But as soon as he walked into the Veterans Hall, he had made a decision. ‘This is the place,’” he said.

Les spent about 30 days straight at MVH Bangor back in 2013 when his father-in-law was a resident.

Despite being nervous about being around so many older folks, he was soon put at ease.

“Once I got here, I saw how nice everyone was treated and how happy they were,” he said. “I thought, ‘This is a good place to spend some time.’”

Les continued to visit the Home after his father-in-law passed away.

“All of the residents were so pleased to have someone who wanted to chat,” he said.

An Army Veteran himself who served during the Vietnam War, Les said he’s already got his eye on a room at MVH Bangor.

“In the future, when my wife doesn’t want to take care of me anymore, I’m coming here,” he said.

Tips for choosing a senior community >>>

Les often accompanied residents and staff on outings, volunteering to drive the recreation van. The residents loved to rib him about his driving.

“Sometimes you have to be thick-skinned to spend time with this crew,” Les said, laughing.

They’d go on picnics and barbecues, shopping trips to Walmart where the staff had come to know them, and UMaine sporting events. A favorite activity among residents is, hands down, Bingo, he said. They also love to listen to music.

“It can be very calming,” he added.

Les likes to organize slide shows for residents, one from a trip to Busch Gardens in Tampa, Florida, and another from an air show. It doesn’t matter the topic, though.

“They love watching them,” he added.

Activities Director Editha Young said she could call Les any time of the day and he would drop everything to serve the Home’s Veterans.

“Whether it was driving a resident to a doctor’s appointment at 5am or taking them to a family part at night or on a weekend, Les is there,” she said.

Les not only drove the us to 90 percent of the outings residents went on, but cleaned the inside and outside of the bus regularly. He also updates all the Home’s tablets for the residents’ beloved music programs.

“My staff joke that if I have five versions of Les, they wouldn’t have a job,” Editha said, laughing.

Les said when the virus was first introduced in Maine, he worried about the residents.

“But I’m glad the Veterans’ home did a good job of keeping them safe and protected.”

Les can’t wait to get back to volunteering. Last year, he spent more than 500 hours volunteering at the Home. When COVID is over, Les encourages anybody to spend some time with the Veterans at MVH Bangor.

“I’ll be thrilled when I can go back,” he said.

The feeling is undoubtedly mutual, Les.

Maine Veterans’ Homes is an independent nonprofit organization that cares for Veterans, their Spouses, and Gold Star parents. It has six locations throughout the state and offers various services, including short-term skilled nursing care, long-term care and assisted living, rehabilitation and therapy, and more. To learn more, download our free Eligibility Guide >>>