Growing up in Washburn, Donald Frederick Foster took advantage of being near the Aroostook River and often fished as a child and teen.

His father, William, was a principal and teacher, and Don’s mother, Maxin 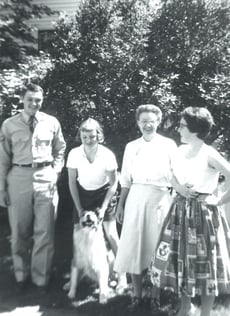 e, was an English teacher and senior advisor. Don and his two sisters, Diane and Suzanne, both graduated from Washburn High School. Don says his parents being teachers at the school he attended never posed an issue. Don went about his business studying, playing baseball, and basketball, and graduated in 1955.

During the summers of his youth, Don did what many folks at the time from The County did during fall – pick potatoes.

Out of a strong desire to serve his country, Don put college on hold to enlist in the Air Force in 1955

“The people there didn’t live in igloos or anything, but it was cold,” he said.

As a supply specialist, Don oversaw procedures for shipping, receiving, storing, and issuing stock. He also handled the movement, storage, and maintenance of ammunition, medical and food supplies. After four years of service, Don left the Air Force in 1959.

In His Parent’s Footsteps

After the military, Don attended Washington State Teachers College for what he calls the "family trade" – teaching. Don taught for about 15 years, beginning his career in Rockland and then Hallowell, before settling in Berwick for a number of years. After teaching, he worked in a grocery store. It wasn’t until 2017 that Don came back home to The County.

Now a resident at Maine Veterans’ Homes - Caribou, Donald Foster has been named our Calendar Veteran of the Month for March. Thank you for your service, Donald.