Roscoe McIntosh has been a life-long hunter and fisherman. He has fond childhood

memories of learning to fly-fish with his father in the lakes, rivers, and streams in Maine’s northernmost Aroostook County and nearby Canada. He also spent many successful hunting seasons in the Chamberlain Lake region at a hunting camp shared by numerous family and friends. Born in Easton but raised in Caribou, Roscoe is the middle child between one brother and one sister. Their parents, Roscoe and Madeline, provided a caring and loving upbringing for their children.

After Roscoe graduated from Caribou High School he enlisted in the Air Force. He said boot camp taught young trainees everything they needed to know about military service.

“When you’re young, you’re able to do that stuff,” he said, of the physical strength and endurance that was required to train to serve your country.

Once he completed basic training, Roscoe served a year in Korea, and then traveled to South Dakota as an office equipment specialist. Staff Sergeant McIntosh left the service in 1954, and about a year later, met his wife, Noreen, at a party. They married shortly after. 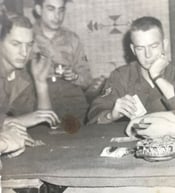 They raised five children in Aroostook County: Bridget, Michael, Colleen, Jerry and Scott. They also have 13 grandchildren and 13 great-grandchildren.

A Career After the Service

Roscoe installed televisions after the service, then repaired office equipment for Loring Air Force Base – a job he procured because of his military background and specialty. After about a year, he went on to open his own business servicing office products. The company eventually became M&S Office Products; the “M,” of course, standing for McIntosh, and the “S,” for his business partner, Carl Savage.

Roscoe started his career by servicing Remington Rand products, especially the typewriter. Over time, he added several other companies, including Smith Corona and Olivetti, and a variety of products, including calculators and eventually, computers. In fact, Roscoe would have sold and serviced some of the very first computers in Aroostook County.

Several times throughout the years Roscoe upgraded the company’s office space on State Street in Presque Isle to accommodate business trends. M&S Office Products eventually became a storefront, offering not only service on office equipment, but

sales of equipment and related supplies of everything needed for running a successful office. Eventually the business relocated to a larger space on Main Street, where it remained until Roscoe retired.

Trip of a Lifetime

There were many highlights over the business’s 38 years, but one that stands out is a trip to South America that he and Noreen were treated to by one of their vendors, Olivetti. The couple, along with other important vendors, were flown to Peru, then Buenos Aires, Argentina, Rio de Janeiro, and Sao Paulo, Brazil.

“It was first class all the way – the travel, hotels, tours, food – everything,” said Noreen.

The two-week trip took the couple to beautiful beaches, authentic cultural shows, and some of the best accommodations around. They’ll also never forget the people of South America.

“The people were so nice, and very attractive,” said Noreen. “They didn’t walk out of their houses unless they were fabulously dressed.”

They also witnessed the aftermath of a revolutionary war that overthrew the Argentinian government.

“We could see bullet damage in some of the federal buildings,” Noreen said.

Roscoe McIntosh has been named April Veteran of the Month at Maine Veterans’ Homes - Caribou, and appreciates the care that he is given.