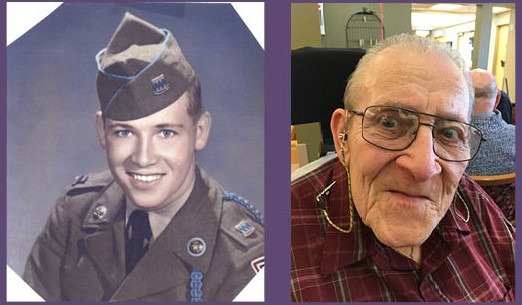 At 86 years old, Gerald Saucier has memories of his childhood growing up in Eagle Lake that are still as clear as day. The oldest of 11 children to William and Clarina, Saucier remembers what it was like when he and his sister Shirleen were the only Saucier children.

“We woke up to a very special Christmas tree all lit up with candles,” he said.

He also remembers being educated at a local convent. Though the nuns were strict, Saucier said, they did a thorough job teaching their students the difference between right and wrong.

Hard Work Runs in the Family

Saucier’s father worked in the woods, cutting trees in four-foot lengths to be hauled to Eagle Lake Mill where the wood was eventually turned into bowling pins. Saucier joined his father working in the woods of Maine after eighth grade. During the fall seasons of his teenage years, Saucier and the entire family would farm in Washburn, picking up barrels of potatoes and hauling them to the property’s potato house.

At the age of 19, Saucier enlisted in the Army.

“I wanted to defend my country,” said the proud Mainer.

Saucier was trained at Fort Dix, New Jersey, before shipping out to Japan on the USS Frederick Funston, toward the end of the Korean War.

After serving his country from 1953 to 1956, and making many good friends, Corporal Saucier was honorably discharged from the Army.

“I was proud to be there. At that time I felt it was my duty; I never gave it a second thought,” he said, adding that he went on to join the Army National Guard in Caribou where he served as a medical assistant.

After the military Saucier worked at Birds Eye, the vegetable processing plant in Caribou, in the lab and freezer, then went on to work in the home repair and improvement business.

Saucier worked so much as a child and teenager that he didn’t have many hobbies. After retirement, however, he found joy in volunteering with the Area on Aging, helping with Meals on Wheels and as a senior companion. He also volunteered with the homeless through the Red Cross.

In addition to being generous of his time, Saucier has always liked to collect coins and trace his family’s genealogy.

Saucier’s considers his greatest accomplishment to be his family.

“We raised them up to be honest and loyal,” he said, adding that they, like him, are also loyal to their country – three of their sons have served in the military.

Saucier, now a resident at Maine Veterans’ Homes - Caribou, is Veteran of the Month for March. Thank you for your service, Gerald.

Mr. Saucier enjoys some of his favorite pastimes as a resident of MVH Caribou – Bingo, watching Westerns and classic movies, listening to French and country music and more. To see if you or your loved one is eligible for residence at one of six Maine Veterans’ Homes, see requirements and how to apply >>>