Vet Has Fond Memories of Childhood Despite Hardships

John Goslin was born May 5, 1930, in Sheridan, Maine, to John and Yvonne Goslin. When John was 2 the family moved to Fort Kent. Only two years later John’s father died, leaving Yvonne to care for John and his five siblings.

She was a good cook and a good nurse; she was also bilingual, which was common for this area of Maine that is so close to Canada. Despite the hardship of losing his father, John had a childhood full of loving memories.

He remembers picking potatoes with his oldest sister Doris – she could pick 100 barrels a day! A monstrous sledding hill in the back yard provided hours of winter fun and skating on the St. John River is a memory John won’t ever forget. The Gosling siblings also had a favorite fishing spot on the St. John and sold the fish they caught for 25 cents each.

John worked on a local farm up until he was drafted into the Army. He was sent to Hawaii for boot camp 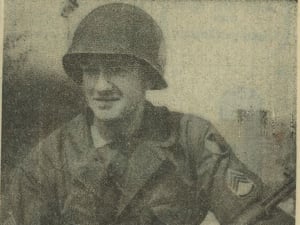 and credits working on the farm for already being in good shape. He also knew how to shoot a gun because he owned rifles back home, which impressed his fellow soldiers.

The corporal sergeant’s primary job after boot camp was as a sharp shooter on the front line in South Korea during the Korean War. He’ll always remember the good friends he made during the war and getting to visit Japan.

John returned to The County after the war and married his wife, Margaret in 1948. They have two children, Patricia and Michael.

John worked at the A & P and went to college, eventually earning his Master’s in teaching. Into adulthood he enjoyed the outdoors: fishing, hockey and snowmobiling.

Now a resident at Maine Veterans’ Homes - Caribou, John likes to spend his time reading, playing bingo, socializing and going out with fellow residents. He also enjoys not having the obligations that work life brought (we hear that, John!).

John is December Veteran of the Month at MVH Caribou. Thank you for your service, John.