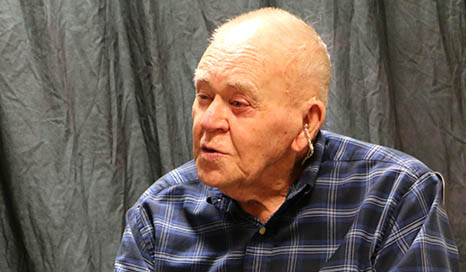 Army Veteran Says He'd Do It All Again

Wilburn Scott, born April 25, 1927, came from a loving family of farmers in Presque Isle whose Christianity was very important to them. His parents, Robert and Octavia, had two other children; Wilburn is the oldest.

As a young man, Wilburn took advantage of all that the Maine outdoors has to offer; hunting and fishing were his passions, and he was a member of his local Snowmobile and ATV clubs. His career, like his father’s, was picking potatoes on the family farm. When he had free time, he liked to ski with friends and cut a rug at the town’s dance hall.

While Wilburn didn’t finish high school, he had the opportunity to earn his GED during his service in the Army in the Korean War. That year, before he enlisted at the age of 23, he had been farming mainly by himself and says he’ll never forget that he broke even – quite the feet for a farmer at that time.

Wilburn completed boot camp at Fort Devens in Ayer, Massachusetts, where he says the officers were nice and he was granted a Class A pass to go out during the evenings – to dance, no doubt. After boot camp, Wilburn was assigned to administrative school in Fort Dix, New Jersey. He served his country from 1950 to 1952.

Wilburn said being in the military was a great experience and if given the chance, he’d do it all over again. He did say his time in the service was a little difficult because he was very near-sighted and had a hard time seeing without his glasses.

Back to Farming in The County

After being honorably discharged from the Army, Wilburn came back home to Presque Isle to farm, and then to Washburn, where he also farmed for a time. He went to work for a neighbor building houses before going into business for himself.

He married Cecile Scott and had four children: Russel, Vicky, Roger and Gordon. They have seven grandchildren and three great-grandchildren.

Wilburn continued to enjoy hunting and fishing as an adult and became involved in the Boy Scouts of America Exploring program. Wilburn was an adviser in this division of the Boy Scouts and considers it one of his greatest accomplishments, second only to marrying his wife and raising a family.

Now a resident at Maine Veterans’ Homes - Caribou, Wilburn likes to read, go on the many outings the home offers, and exercise. He also likes that he doesn’t have to cook, clean or do laundry! Wilburn’s favorite music are hymns and marching music, and his favorite sports to watch and play are baseball and softball.

Wilburn is the November Veteran of the Month at MVH - Caribou. Thank you for your service, Wilburn.

Wilburn loves that the staff at Maine Veterans' Homes care for all of his needs. To find out exactly what care at our six homes encompasses, download our free eligibility and benefits guide.