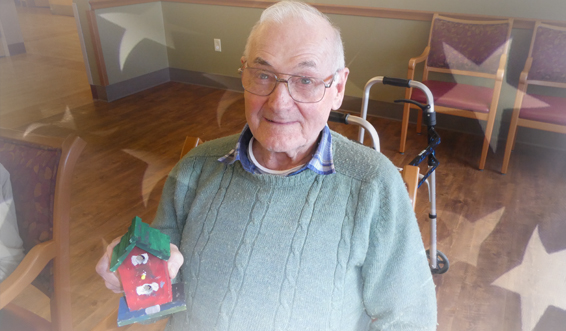 Fort Fairfield native Eugene Wilson remembers a few constants during his childhood: religion, working on the family farm and his mother working hard during the potato harvest. He is the oldest of Hood and Ruth Wilson’s four children.

Eugene was still in high school when he was drafted into the Army to serve in the Korean War.

Eugene served as a guard along the border between North and South Korea and will never forget a particularly long shift when no one came to relieve him for three days. The shift shift was only supposed to last half a day, so he had to make his supplies last the entire time.

He also fondly remembers helping a fellow soldier write letters home to his mother, because the soldier couldn’t read or write. It brought him great joy to know that he was helping his friend communicate during a time when families needed supported from one another. Eugene said his service in the Army shaped his life in a positive way. “It changed me from a boy to a man, I’m glad I went.”

After serving from 1952-1954 and being honorably discharged from the military, he returned to Fort Fairfield where he married Mary Ellen Drake.  Once back in Maine, Eugene continued to farm and worked as a repairman. He and Mary Ellen have two children, Bruce and Sally, whom Robert considers among his most cherished accomplishment.

When he had the time, he liked to ice skate, fish and hunt, all activities easy to come by in the northern part of Maine.

Now a resident at Maine Veterans' Homes - Caribou, Eugene Wilson has been named Veteran of the Month for May. Thank you for your service, Eugene.

In addition to its Caribou location, Maine Veterans’ Homes, a nonprofit organization, has Homes in Augusta, Bangor, Machias, Scarborough and South Paris. In addition to Veterans, their spouses and Gold Star parents are also eligible for residence at any of our Homes. For more information, download our free Eligibility Guide >>>