Ed Browne Jr. is a born leader. Serving in the military, during his career as a logger, and now in retirement, Ed is constantly recognized for his leadership. 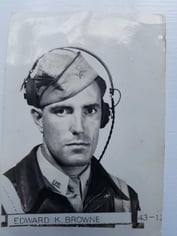 He was drafted into the Army in 1942 and was assigned to the 8th Air Force, 452 Group, where he was a gunner on a B-17. In May 1944, his aircraft was shot down over Frankfort where he and nine members of his crew were imprisoned for 10 months. Browne earned the Air Medal, European Campaign Medal and was offered a Purple Heart, which he humbly declined maintaining that it just didn't seem necessary.

Life in Alaska and Beyond

After Ed was discharged in 1945, he moved to Alaska and married local school teacher, Ruby Green. They raised two children together, Kathleen and Samuel. Ruby passed away and eventually Ed met Margaret Nugent. They were married and moved to Ketchikan, Alaska, where he worked for the Bureau of Land Management, mapping soils. Ed worked in the lumber industry as a timber grader and scaler for more than 30 years. Nor'west Logging Company awarded him the High Climber achievement award in 1952.

The couple moved to Maine in 1989 and settled in Dennysville. They became involved in the Congregational Church where Ed served as a trustee and greeter. He also served on the Dennysville Historical Society and as a Boy Scout leader. He was widowed for a second time when Margaret passed away in 2003.

Ed spoke to a high school where he accounted his time as a POW. He received a standing ovation from the 500 people in attendance. A resident at our Machias Home, he likes to streamline services for others and at 100 years old, he’s known as a leader and motivator. He’s also known for his kindness and notes of encouragement to residents, staff and community members.

Ed is our Calendar Veteran of the Month for May and a resident at Maine Veterans’ Homes - Machias. Thank you for your service, Ed.

Whether you served in wartime like Mr. Browne or during a time of peace, if you are a Veteran who was honorably discharged from the military, you are eligible for residence at Maine Veterans’ Homes. To lean more, download your free Eligibility Guide >>>