Veteran Goes On To Have Career with Chicago Fire Dept.

Donald Leo Burke was born Aug. 5, 1926, in Chicago, Illinois, the oldest child of Martha and Leo Burke. He has a brother and sister, Patrick and Marge.

Donald attended a Catholic elementary school and Lane Tech High School. He had several jobs as a teen, including a paper route and working the night shift at Western Electric. When he wasn’t working, he could be found by the river fishing for perch.

In his second year of high school, Don’s friend Harry introduced him to a girl named Emma. “She caught my eye immediately,” Don said. Don was a skilled dancer and known for his perfection of the jitterbug. With a party coming up, he knew this was his chance to impress Emma. Don admits he may have shown off a bit for Emma, adding that he was willing to do what was needed to “reel” her in. The two have been in love hook, line and sinker ever since.

After his third year of high school, Don took a leave of absence to join the Army. He served in the Signal Corp during the European Theater at the end of World War II. While he was away, there wasn’t a single day that he didn’t receive a letter from Emma. She even sent homemade cookies in the mail.

After the service, Don returned to his hometown to complete his last year of high school. After graduation he and Emma married on Aug. 16, 1947. Don went on to earn a business degree at the College of Illinois. Later, Don began work at the Chicago Fire Department where he was employed for 27 years, retiring at the rank of captain.

Don loves to reminisce about his time with the department. On his days off he drove a semi-truck and 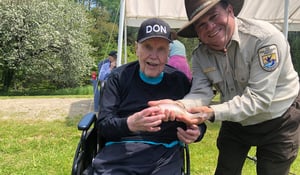 delivered food to local businesses. Don also had family responsibilities – he and Emma raised five children: Tim, Sharon, Mary, Nancy and Sue. Don and Emma have been given the gift of 10 beautiful grandchildren to spoil. The doting grandparents enjoyed traveling to Florida in the winter to visit; they even went to Disney World the second year it was open.

In 1979, Don and Emma moved to Maine and later settled in East Machias where he built their home. He enjoyed woodworking, especially making furniture, including the cabinets in their home. Don is a diehard cribbage fan and spent several years as a member of the Machias Cribbage Club.

Now a resident at Maine Veterans’ Homes - Machias, Don is our December Veteran of the Month. Thank you for your service, Don.

While a resident at MVH - Machias, Don still plays cribbage, enjoys bingo and counts listening to music as one of his favorite pastimes. Don’s favorite days, however, are when his love, Emma, visits. “I always thought my life was a blessing,” Don reflected. Emma can visit Don any time of the day, 24/7.

To learn more about becoming a resident at one of our six homes throughout the state, download our free eligibility guide.