Keith Edgar Smith spent much of his childhood on the Little Kennebec Bay portion of Machias Bay, fishing for trout with his siblings, Harold and Janice.

“I ate a good many trout out of the brooks in Kennebec,” he said.

Keith’s parents, Bertrum and Winifred, were both skilled musicians and his father taught Keith how to play the guitar when he was only 5 years old. His mother taught him to play the harmonica, which he still plays to this day.

“It was an easy instrument to learn and many of the local kids had them,” Keith said of the harmonica, adding that he often played both instruments together using a holder for the harmonica, keeping his hands free to strum the guitar.

Working on the Blueberry Barrens

Keith attended high school in Libby Hall of the old Machias High School on Court Street in Machias. Keith said that he wasn’t always eager about school but during the last two years he played the tuba in the high school band and enjoyed that very much.

To afford school clothes Keith raked blueberries every summer and his parents allowed him to keep $5 of his summer earnings to spend on something fun. He also worked at the Whitneyville Sawmill during his high school years and after graduation in 1951.

Army Life and Beyond 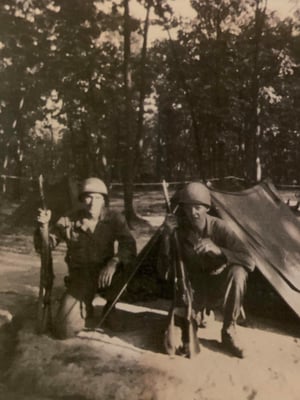 Karlsruhe, Germany, where he worked in wire communications.

After Keith was discharged from the Army in May 1955, he returned to the Machias area and settled into civilian life. He worked for Roger’s Wayside delivering gas for four years, then for Schoppee’s Dairy for 11 years. Like many others from Downeast, he also did some clamming, which paid the best money among all the jobs he had.

One of Keith’s lifelong loves is building and flying radio-controlled model airplanes. He took up the hobby at a young age and he has continued to enjoy it throughout his life. Keith even recalls building models on his footlocker in the Army.

Keith was never married and didn’t have children, but he met his sweetheart about five years after the Army and they were together until her passing 16 years ago.

Now a resident at Maine Veterans’ Homes – Machias, once and awhile Keith will delight residents and staff by bringing out his harmonica to play. Keith Smith has been named Veteran of the Month for August at MVH Machias. Thank you for your service, Keith.