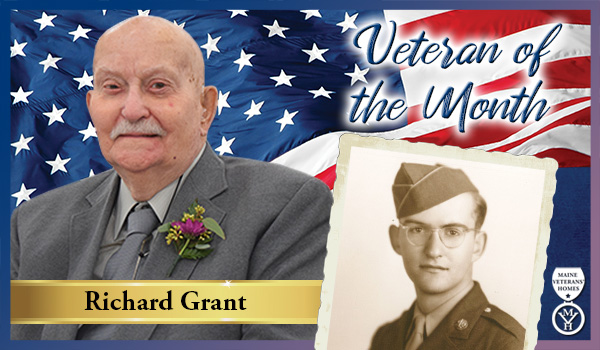 It was a thankful day indeed for the parents of Richard “Dick” Holbrook Grant, who was born Nov. 24, 1927, in New Briton, Connecticut, two days before Thanksgiving,

His father was a teacher, and his mother stayed at home to care for Dick and siblings Robert, Leighton, and Madeline. The Grants moved more than 400 miles to Columbia Falls, Maine, when Dick was just six months old.

Dick attended Columbia Falls Elementary School, followed by Columbia Falls High School, where there were only 35 students. It was World War II, and many of the teachers were serving their country, which reflected on the level of education provided.

At the age of 18, Dick joined the U.S. Army. The draft was active, so he decided to take “the gamble” and enlist rather than be drafted; that way, he would know what to expect for a time commitment. Dick started out at Army Finance School at Fort Benjamin Harrison in Indiana, where he studied business finance. By the time he completed schooling, the war was over, and he was sent to the Philippines on the “slowest boat you ever went on,” he said.

“We went under the Golden Gate Bridge in San Francisco. That was very impressive,” he added.

In total, Dick served 18 months: 6 months in the states and 12 months in the Philippine Islands. He started in Manilla and then went to Leyte, where he spent the rest of his time.

“The country was destroyed by the war. It was devastating,” Dick said.

When Dick returned from the Philippines, he discovered that his father had purchased a building in Columbia Falls. They started Grant Brothers, a local grocery store, which changed hands several times over the decades and only closed within the last few years.

After working for his father, Dick decided to go to college. He anticipated that it would be difficult because of the quality of the education he received during his early years, but that didn’t stop him. Dick graduated from the University of Maine at Orono in 1953 with a degree in teaching. He taught at Shead High school in Eastport and Sumner High School in Sullivan during the first several years of his teaching career. He then decided he wanted to go back to college for his Master’s in education, which he completed in 1957. Dick taught others how to teach at the Campus Training School, now the University of Maine at Machias, from 1957-1963. It was a job he loved very much!

Dick met his future wife, Patricia Bayley, in 1957, and he was head over heels.

“She and her mother were at Bonnie Brook Bungalow Restaurant in Harrington. I met her there and fell in love,” Dick recalled, adding that Patricia’s mother ran the restaurant.

The couple resided in Columbia Falls and had two sons, Alan and Bayley. Dick also adopted Patricia’s son from a previous marriage, Jesse, who sadly passed away when he was 37 years old. The couple was married for 48 years when Patricia passed away in 2005.

The Grant family lived in Bangor for about seven years when Dick was superintendent of the East Corinth Schools.

“The boys were not happy there, though,” Dick said. “They wanted to be in the country.” The family moved back to Columbia Falls, where Dick became the superintendent for School Administrative District 37. Both his boys went to school locally, graduated, and were off to college. Dick retired from SAD 37 in 1981.

Upon retirement, Dick fulfilled his and Patricia’s dream of owning a bed and breakfast. They purchased a former nursing home in Bar Harbor, renovated it, and opened the Holbrook Inn (named after Dick) in 1980. With the stress of owning a business and dealing with upkeep, Dick recalls many sleepless nights he and his wife spent wondering what they had done. After three years, they sold the inn, which is still in business today. After selling it, Dick and Patricia built a Cape Cod-style house in Columbia Falls. Dick was excited as this was the first house his son, Alan, a carpenter, built from the foundation up. He lived there with Patricia until her passing.

Now a resident at Maine Veterans Homes - Machias, Dick enjoys socializing with the friends he’s made, Bingo, reading novels, receiving and writing letters to friends from his community, and his work with the Ruggles House, a historical museum in Columbia Falls. Dick is very proud of his commitment to the Ruggles House. He has been a board member for 40-plus years and was even president of the board at one point.

Dick has been named April Veteran of the Month at MVH Machias. Thank you for your service, Dick.