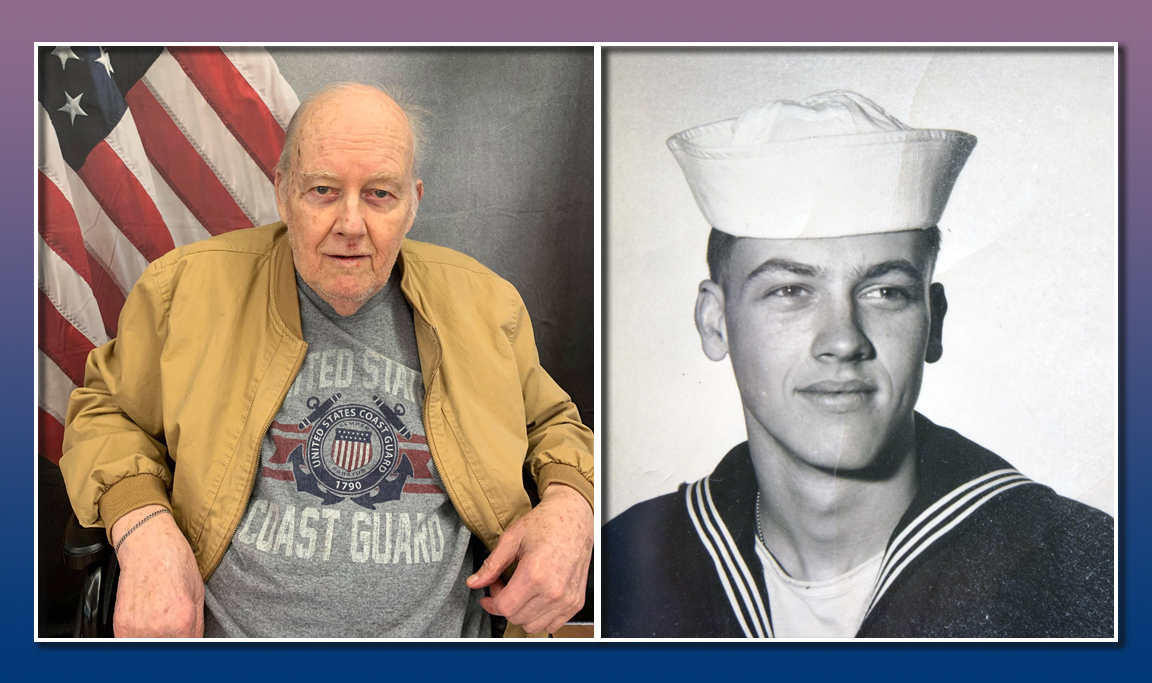 Bostonian Robert W. Hall felt fortunate to grow up along the New England coast. He and his family enjoyed so many summers on nearby Cape Cod that it’s no wonder that he went on to join the U.S. Coast Guard.

His parents, William and Ruth Hall, had family on the Cape, and Robert spent a great deal of his time fishing for stripers and hunting with his cousin. He attended schools in Milton and graduated from Milton High School in 1955.

After graduation, Robert briefly returned to Cape Cod for some adventures with family and close friends before enlisting in the Coast Guard. He attended basic training in Cape May, New Jersey, and was then assigned to the Nantucket Life Boat Station, where he felt right at home. After all, it was just 30 miles from his beloved Cape Cod. Robert likes to reminisce about the adventures he had, including when he assisted with delivering a baby off of Nantucket Island.

“Don’t ask me if I was scared… I wasn’t scared. I was petrified,” he said.

Robert was sent to Coast Guard Radio School in January 1957, where he graduated as a Third Class Radioman. He then traveled up to South Portland, Maine, and was attached to the Coast Guard Cutter Acushnet. Onboard the Acushnet, Robert traveled to the frigid Arctic before being assigned to a post in Boston where he was in search and rescue. Robert left the Coast Guard in 1960 and stayed active in the Coast Guard Reserves.

After, Robert applied for a position at the Foxborough Company near his hometown of Milton. He was hired as a buyer of electrical components to coordinate the Alaskan Pipeline’s western end at the company’s East Bridgewater plant. It wasn’t all work, however, for Robert. One of his fondest memories is of evenings spent playing Donkey Ball, a game similar to baseball, but instead of running to each base, the players ride a donkey.

“I had more fun doing that than anything else,” he said. “I hit the ball out of the park one day, but the donkey I was on never made it to first base! I’ll never forget that as long as I live.”

On June 17, 1961, Robert married the love of his life, Melissa Ewell. Robert and Melissa were blessed with four children: Bruce, Glenn (who passed away in 1964 after five short days of life), Lynda, and Chuck. Robert and Melissa are the grandparents of five beautiful grandchildren, Bruce Jr., Laura Lee, Mindi, Matthew, and Kayla.

Robert was a charter member of the Junior Chamber of Commerce in East Bridgewater, Massachusetts, and was responsible for coming up with a volunteer project for the group to support. He knew of a young man struggling to beat cancer at the Boston Children’s Hospital and volunteered there twice a week for nearly three years.

Robert’s volunteer work and service also included the Masons, where he was first a member at Whitman Lodge in Massachusetts and then later transferring to Narraguagus Lodge in Maine.

After spending 25 years with the Foxborough Company, Robert moved his family to Maine in 1987. Once in Maine, he began working for Wyman’s and then went on to work for Cherryfield Foods, where he managed 150 miles of irrigation systems for blueberry fields.

R0bert’s passion for volunteerism continued in Maine. He assisted with the food pantry in Cherryfield and at the Seacoast Mission, which provides help and support for the people of Washington County and islands off the coast.

From Cherryfield Foods, Robert went to work for Morrill Worcester, where he performed various duties, including buying, setting up paving crews, and bidding on projects. Robert started buying material to build for multiple Worcester enterprises, including the power plant in Deblois, Peat Bog, County Concrete, and Worcester Wreath.

Robert then began working in sales for Wreaths Across America, where he remained for ten years, selling between 300 and 400 wreaths in the Ellsworth area each year.

Also, around this time Robert joined the First Congregational Church of Cherryfield, where he served as a trustee and was in charge of maintenance from 2003 to 2013. In 2014 he became a Deacon and served as a greeter.

In 2016, Robert finally retired and began living at Maine Veterans’ Homes - Machias. In 2019, his beloved wife, Melissa, passed away.

Robert Hall has been named Veteran of the Month for March at MVH Machias. Thank you for your service, Robert.