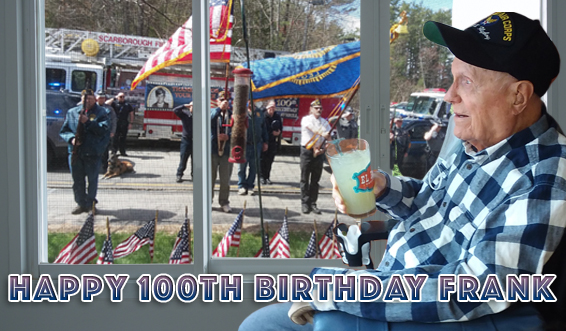 The last 100 years are packed with occasions in history that have shaped the world – World War I, World War II, the building of the Empire State Building, the Great Depression, The Civil Rights Act and much more.

What do they have in common with Maine Veterans’ Homes - Scarborough resident Frank Averill? They all occurred during Frank’s lifetime.

Frank turned a century old on May 5, 2020, but because of COVID-19, Frank thought this milestone birthday was going to come and go with little fanfare, and he was alright with that.

His MVH Scarborough family and community, had other plans, though.

May 5 is Cinco de Mayo, after all. So staff got to work and partnered with local Mexican restaurant El Rayo to gather the ingredients and glass days before his birthday so the items could be quarantined and considered safe to bring on to Frank’s unit.

When word spread that a Veteran in the Scarborough community was going to turn 100, others also stepped up, including Rep. Chris Caiazzo, who was instrumental in having huge banners made with Frank’s military photo, wishing him a happy 100th birthday.

“One of the greatest honors of being a public servant is to be able to express my gratitude and appreciation for those service members who answered the call to serve our country,” he said. “Maine Veterans have been through so much, and that is particularly true for the residents of MVH, who have now had to weather the tragic consequences of a pandemic in a deeply personal way. It underscores how important it is to take these moments to say thank you and to celebrate their lives.” 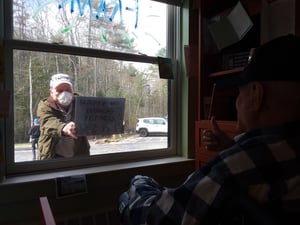 one of their giant ladder trucks; an ambulance and other vehicles also came for a “parade” throughout the MVH Scarborough grounds. They, along Scarborough Police Department members saluted and waved as they passed by Frank’s window.

In addition, members of Libby-Mitchell American Legion Post 76 in Scarborough arrived with a full honor guard and performed a presentation of colors. After, they, along with the town’s emergency personnel, sang “Happy Birthday.”

“He thought he was getting nothing,” said his daughter, Sharla Cummings, choking up as she spoke. “This makes me very happy, I just want to cry – he’s so blessed.”

Frank, who served during World War II in the Army Air Corps, traveled from base to 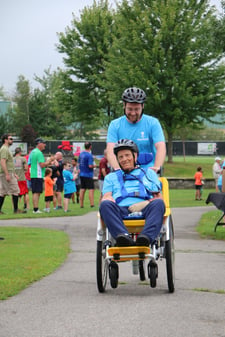 base throughout the United States from 1942 to 1946 as a crew chief, readying planes and pilots for travel overseas.

Cummings said that to look at her father, one would think he’s 20 years younger than he actually is. Last year at 99 years old he participated in the Maine Vets 5K with a staff member on a tandem bicycle.

“It was a wonderful event,” said Maureen Carland, the Home’s administrator. “It was 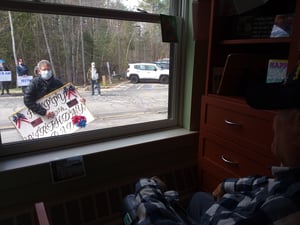 not only an incredible day for this gentlemen, but for all of our residents and staff who go to be part of this celebration, thanks to the generosity of our police, fire and EMS partners.”

What did Frank think of the festivities? Surrounded by birthday cards in his room at MVH Scarborough and the grass outside his window filled with nearly a dozen American flags staked in the ground, his words were few, but expressed with much gratitude:

“It couldn’t get much better.”

Frank served in the Army Air Corps from 1942 to 1946 during World War II as a crew chief, readying planes and pilots for travel overseas. Whether you’re a Veteran who during war or peacetime, abroad or in the United States, you’re eligible for residence at any of the six Maine Veterans’ Homes locations. To learn more, download our free Eligibility Guide >>>