When Frederick Douglas Williams was only 2 years old, his parents moved to New York 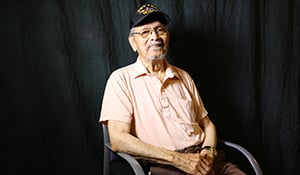 Frederick attended high school in upper Manhattan where he enjoyed playing basketball. After graduation he entered the United States Army Air Corps where he was a Tuskegee Cadet. He served in Florida and other southern states in administration during World War II and the Korean War.

Once out of the military, the GI Bill aided Frederick in earning degrees from City College of New York and New York Law School. He’s very proud to be a member of Kappa Alpha Psi, the largest predominantly African American Greek collegiate fraternity in the country.

Frederick practiced real estate law in New York and was the first black attorney in Maine.

A lifelong Celtics fan, Frederick even held stock in the team.

Now a resident at Maine Veterans’ Homes - Scarborough, Frederick Douglas Williams is the August Heroes Calendar Veteran of the Month. Thank you for your service, Frederick.

Get your free Heroes Calendar >>>

Maine Veterans’ Homes has five other locations through Maine, including in Augusta, Bangor, Caribou, Machias and South Paris. Veterans who served during peacetime or war, at home or abroad, may be eligible for residence at one of our Homes. Get your free Eligibility Guide >>>