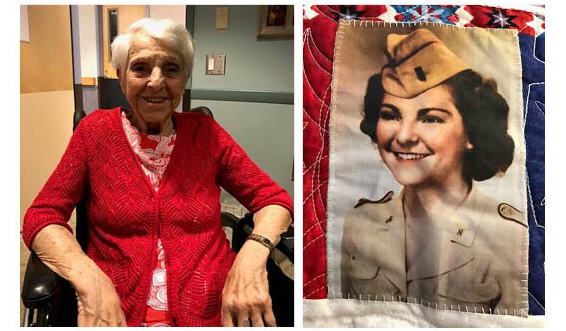 Veteran, Nurse, Only Ever Wanted to Care for Others

Those who have had the pleasure of meeting Viola Palmacci, know that her life has been an inspiration to many.

A member of the first class of nurse practitioners in the state, Palmacci was a pioneer in healthcare not only then, but throughout her life. At the time of her graduation, Palmacci held three jobs, had a husband who traveled for work and five little children to take care of at home.

Palmacci worked in the Emergency Department, in labor and delivery and the Lifeline Program at the University of Southern Maine, which provided healthcare for students. How did she do it all?

“I just always liked to care for people,” she said, smiling.

Palmacci was a first-generation Italian in the United States. When the Palmacci family was still young, Viola’s husband passed away from a brain tumor – the youngest son in the family was only 13.

She not only continued to work three jobs, attend Mass regularly and performed volunteer work, but she managed to do this while lovingly tending to her young children.

“My mother is a magnificent woman, she really is,” said her daughter, Gina Stokes.

Palmacci said those years weren’t without stress. She handled trials and tribulations by talking through them, out loud to herself and in private.

“I needed to be available to my children,” she said. “They didn’t deserve to feel my stress.”

Nurses and others in healthcare tend to be very giving of themselves, and Palmacci was no different. In fact, she often went above and beyond what her duties defined.

“I loved helping to bring babies into the world,” she said, adding that for preemies, she’d take cotton and gauze to make tiny little pieces of clothing for them.

Palmacci joined the Army Air Force in the early 1940s, during World War II, and served at a military psychiatric hospital in Las Vegas.

“I was so naïve, I had never been out of Portland, Maine,” she recalled.

Her family was very strict, but one night a nurse she roomed with in the barracks took her on double date with a couple young men who were also in the military.

“I sat in the back seat with him; he was nice looking, but when he asked me to get out of the car I said ‘No, take me home.’” I was a good girl.”

The man she did marry, Joseph Palmacci, Buster, for short, grew up in Viola’s neighborhood.

“She told me that when she was a little girl, she said she’d marry him someday,” Stokes said.

Stokes said that while her mother’s career was everything to her, so was family.

“Every Sunday she cooked before her night shift: macaroni, meatballs, bread – everything. Then she’d cook a whole other meal for the doctors in the emergency room,” she added.

The doctors she worked with and even helped train had much respect for Palmacci, often seeking her advice on medical matters. Even their wives held the single mother in high regard.

“My mother always had a very beautiful fashion sense. We didn’t have much money, but the doctor’s wives would bring her beautiful clothes. Viola would tell them it was too much, but they wanted her to have them.”

While working in the nursery, Palmacci would have been what’s now called a lactation specialist. Despite working three jobs and having her own large family to care for, she’d travel to a new mother’s home who was having trouble getting her baby to latch.

“She guided many women into motherhood,” Stokes said.

When Palmacci worked in the Lifeline Program at USM, she often served as a second mother to the college students as the school nurse. She would help secure sample medications for students who didn’t have much money; she’d even buy the more needy students socks and underwear.

“She was a mother to everybody and always went the extra mile,” Stokes added.

Palmacci’s career also included teaching classes at Westbrook College and working at a clinic in downtown Portland, giving birth control pills at time when that was frowned upon.

Upon Palmacci’s retirement from USM after 26 years of service, the president gave her a sum of money, enough to go on a nice trip, her daughter said.  Also around that time, her peers set up a nursing scholarship in her honor. Instead of spending the gift from the university on herself as it was intended, Palmacci gave the money to the scholarship fund. For many years after she retired, Viola contributed to the scholarship fund until it was fully funded.

Up until last year, she awarded the scholarships herself to the winning students.

Retirement didn’t come for Palmacci until she was 70 – even after that, she continued to volunteer.

“I worked after I retired. Not for the money, but because I loved being a nurse. I would have been a nurse for free.”

For her entire life, Stokes has shared her mother; shared her with patients, Viola’s colleagues, students and more - and Stokes doesn’t mind one bit.

Viola’s life inspired Stokes’s youngest daughter, Jessica, to pursue a career in nursing. Stokes described her family's relationship with her mother as a rare gift, based on deep mutual respect and unconditional love.

Palmacci took Stokes's daughter Tammi, Viola's oldest granddaughter, to Mass every Sunday morning and out for ice cream from the time she was 2 years old. Viola was her spiritual mentor and that their relationship was very special.

Viola also inspired her daughter JoAnn to become a nurse, and like Vi, she became a nurse practitioner.  Viola was also very proud of her sons, who became very successful in their chosen fields, embracing the incredible work ethic they learned from Viola.

Now a resident at Maine Veterans’ Homes - Scarborough, Palmacci still has that way with people that has made her stand out to all who know her – whether those people have known her for a lifetime, are her children or are those at MVH Scarborough who are privileged to now be her caregivers.

Thank you for your service, Viola.

Veterans at all six Maine Veterans' Homes locations find camaraderie being with others who served their country. We also care for Veteran spouses and Gold Star parents. To find out if you or a loved one are eligible for care at Maine Veterans' Homes, download our free Eligibility Guide >>>