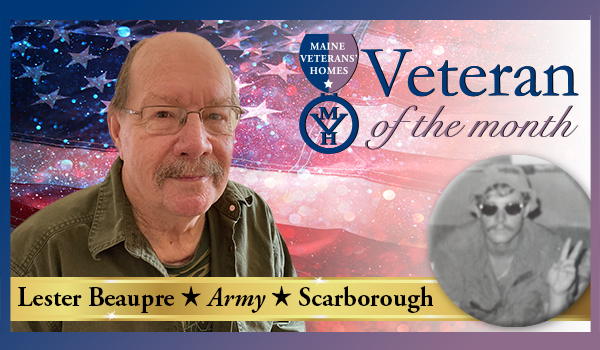 Born and raised in Caribou, Maine, and outnumbered by three sisters, Lester Beaupre had to find something to do as a youth to get him out of the house. As a student at Caribou High School, Lester joined the inaugural wrestling team, and that first year ended up as second in his class in the state.

After high school, Lester attended Northern Maine Vocational Technical Institute, where he studied drafting. The year was 1969, and Lester wasn’t surprised when he was drafted into the Army. He completed basic training at Fort Dix, New Jersey.

“They sent me directly to the bush in Vietnam,” Lester said, adding that the best part of being stationed in Asia was eating food not out of a ration can, like in boot camp.

“I had some interesting foods in the villages of Vietnam,” he added.

Lester was offered two Purple Hearts for wounds he received while on the ground; even took a bullet. However, he declined the awards because he thought it would disqualify him from further service in the jungle.

Despite the many imminent dangers Lester encountered in Vietnam, he made good friends that he’s still in contact with today.

After serving nine months in combat, he spent the remainder of his time in the service in Saigon, working with military police.

When Lester returned to Maine in 1970, he finished his degree in drafting and even taught at the school, now Northern Maine Community College. At the age of 20, Lester moved to Connecticut for a job in carpentry – an excellent fit for a newly graduated drafting major.

Lester met his wife, Louise, at a beach in the Constitution State, and they had two children, Jason and Jill, who they raised in Caribou. They have six grandchildren that range in age from 10 to 17.

Lester stayed in the carpentry business, adding furniture making to his repertoire. His favorite wood to work with is cherry because of its natural oil and because it machines well without splintering.

Ever creative, Lester picked up stained glass making as a hobby once he retired. When he was younger, he took a class with his father to learn how to make it. In retirement, he also found that he had more time to dedicate to target shooting – he loved it so much that he established a range on his property.

Now a resident at Maine Veterans’ Homes - Scarborough, Les says his favorite activity is confusing the nurses – he has a terrific sense of humor! Lester Beaupre has been named May Veteran of the Month at MVH Scarborough. Thank you for your service, Lester.