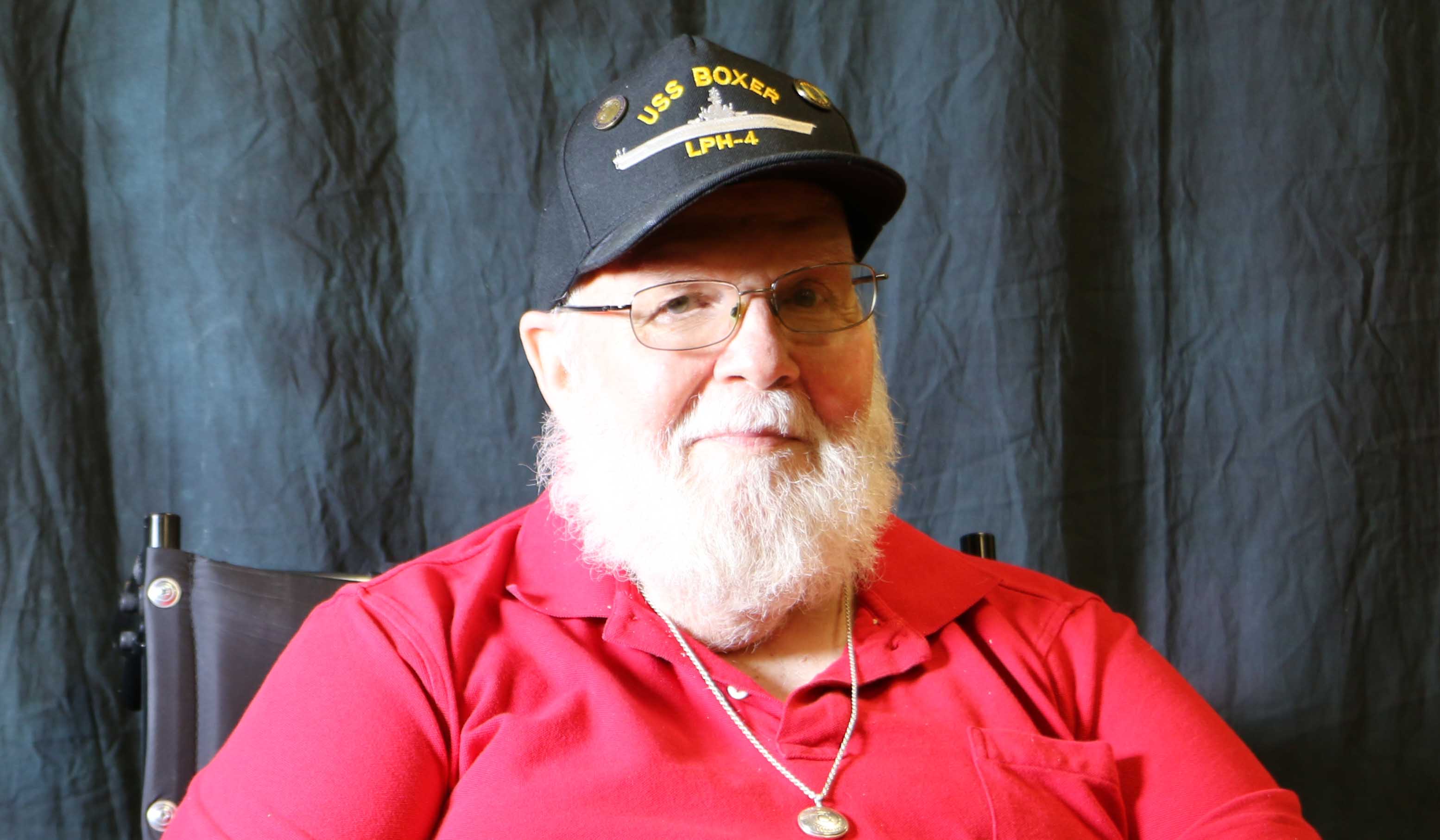 Marine Spends Career Caring For Others

Even when Eugene Hoguet was a young man serving with the Marines, he wanted to help people. His life’s path would lead him to help hundreds and even thousands of people right here in Maine.

Gene was born in El Paso, Texas, and raised in Landsdowne, Pennsylvania. The day after he graduated from Monsignor Bonner High School he enlisted in the Marines.

It was 1962, and Gene was first assigned to Camp Lejeune. He served on the USS Boxer during the Haiti-Dominican Republic Crisis and eventually was stationed at the base of Mt. Fuji in Japan during the Vietnam War. He had served as assistant baker at his previous assignment, so when Gene arrived in Japan, he sought out the lead baker to get the lay of the land. As he searched, he finally learned that he was it – he would be the camp’s only baker and the men had been anticipating Gene’s arrival for six months. 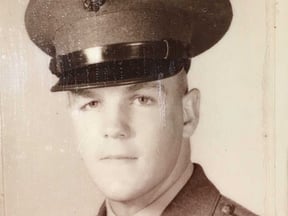 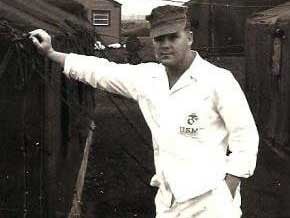 The camp was primitive; it consisted only of tents and Gene had to bake on kerosene stoves. He was left with a box of old recipes and very basic ingredients, but despite these obstacles, the men had to eat. He decided his first project would be to make a sheet cake.

When he took it out of the oven, he remembered a tip he learned from the lead baker at his last assignment: If the cake was ready, he could give it a tap and it would bounce. Gene tapped it, but nothing happened. He tried it a little harder and still it didn’t bounced. Gene put the pan on the floor and did a handstand on the cake but it still wouldn’t budge! What did Gene do? He put an inch and a half of buttercream frosting on top and served it up to his fellow Marines. Not a crumb was left!

Gene and a buddy of his didn’t like it when food was left over, so once a week they’d take leftovers, along with 100 cinnamon buns , halfway up the mountain to an orphanage that cared for biracial children who the Japanese culture identified as outcasts.

After Gene was honorably discharged from the military in 1966, he didn’t do much baking, but he went to nursing school. He worked as a psychiatric nurse for 42 years, including being a nurse supervisor at Dorothea Dix Hospital when it was Bangor Mental Health Institute. He oversaw a geriatric psychiatric program that included as many as 150 patients at any time.

Through his work, suicide prevention became an issue that Gene cared about very much. He developed crisis teams in Downeast Maine and two programs called Dial Help and Phone Help, which served people in the Ellsworth area and Hancock and Washington counties. 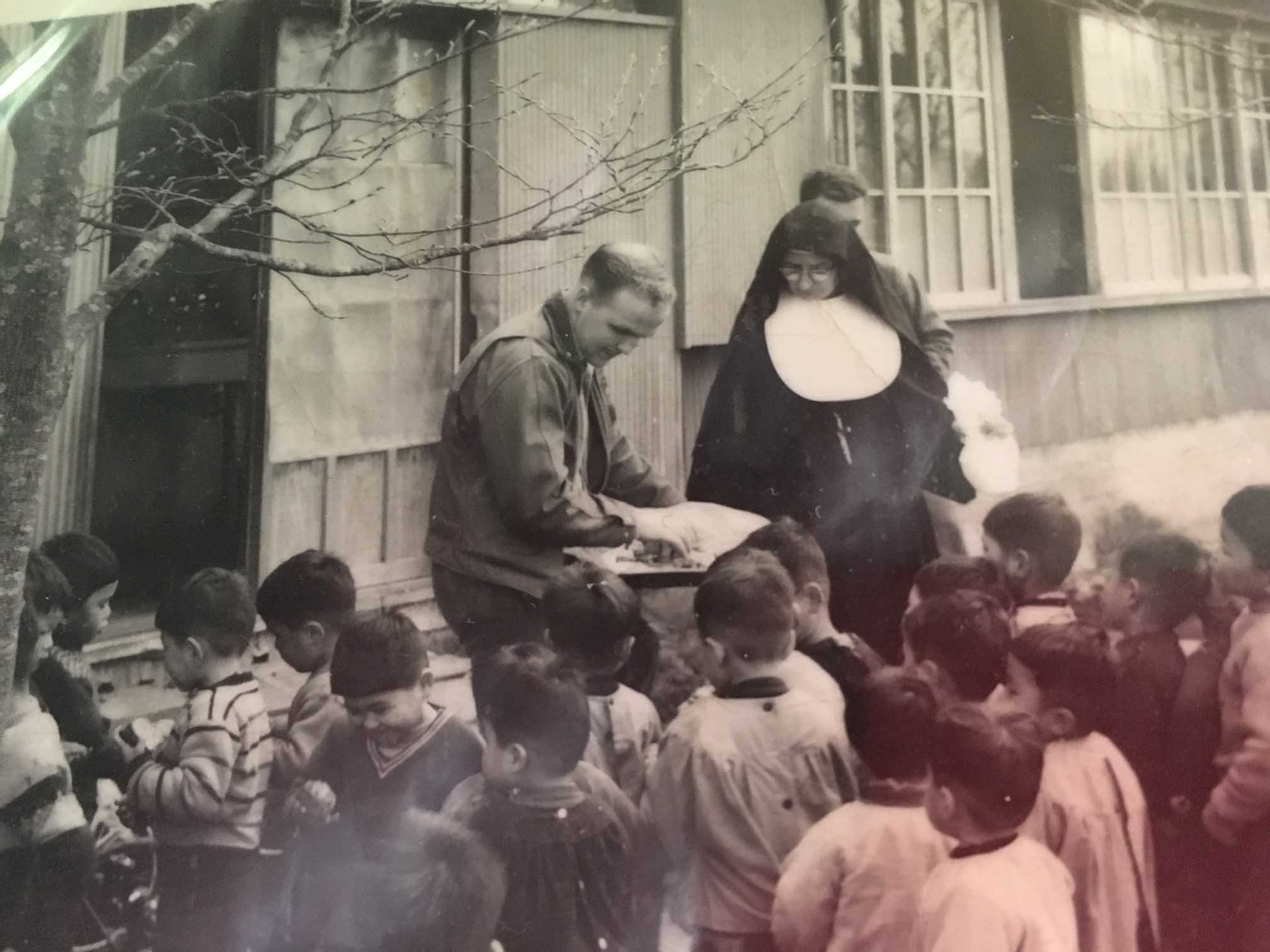 Gene married Jo Shaw during this time ,and along with her three children, Steven, Beth and Michelle, and his daughter, Juliette, they formed what they lovingly refer to as their “heart family.” Gene and Jo lived in various places throughout Maine – Searsport, Bangor and other places – but moved to Southern Maine about 15 years ago when Gene’s health started to decline; two of their daughters are located there. This year Gene and Jo celebrate 41 years of marriage.

Gene’s wife said her husband has a great capacity to relate to people. Children especially are drawn to him because of his resemblance to Santa Claus! A talented musician, Gene would often come up with songs for his patients. Now a resident at Maine Veterans’ Homes - Scarborough, Gene still has a way with people and even the animals at the Home. He plays harmonica every day to Scarborough’s pet cockatiels. 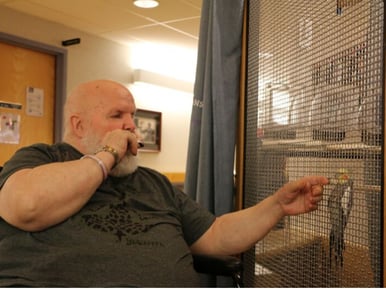 Caring For Others a Lifelong Job

Gene’ family (who is musically talented, like Gene) gathered in Southern Maine recently for a reunion and stopped by the Home, where they played what his wife describes as a “family hippie concert.”

“Before we knew it, the room had filled up with residents. The nurse manager asked if they could play Happy Hour down the hall, which they did, and they even came back the next day and played a two-hour concert where Gene sang and played harmonica,” Jo said.

“I saw people, Veterans, who I had never seen talk, who were singing,” Jo said. “Gene brings out the best in people wherever he goes.”

Gene is October’s Veteran of the Month at Maine Veterans’ Homes - Scarborough. Thank you for your service, Gene.

To learn more and see if you or a loved one qualify for the care provided here,  download our eligibility guide.