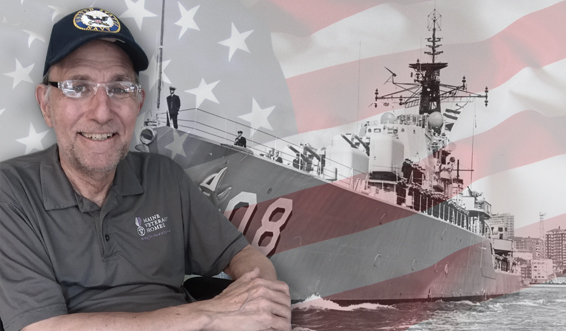 The Italian sandwich is somewhat legendary in Maine, and you can count Portlander Allan Neff among those who enjoy them. He grew up next door to the original Amato’s sandwich shop on India Street and can recall the smell of fresh bread being baked, it wafting across the street and into the windows of his childhood home.

The neighborhood, close to Portland’s waterfront and railroad, was a very tight knit community. Though there was much joy among the families who lived there, tragedy struck When Allan’s mother passed away. When another family’s father passed away, the remaining spouses married. Allan and his brother now found themselves with six more brothers and a sister.

Allan attended Portland schools and considers himself privileged to have been a student in the sixties, during what he calls “the renaissance of rock.”

“I grew up with the best music of the century,” he said.

After high school Allan went to the University of Maine at Orono. During that time, he participated in the Marine Officer Training Program; he was eager to follow in the footsteps of his father, who enjoyed a career in the Corps. This training delayed his graduation, but it helped him realize that he was far better suited for the Navy.

Allan then went off to Vietnam where he worked as an Anti-Submarine Warfare Officer and a Nuclear Weapons Officer on a destroyer. While this might seem like an intimidating position, he flourished in it and said that his years in the Navy were some of the best of his life. He traveled to many harbors throughout Europe, and particularly enjoyed being in Copenhagen, Denmark.

After serving three years in the Navy, Allan was honorably discharged in 1974. With his Navy years behind him, he went on to work as a chemical engineer with four different paper mills throughout the country. This was a tough line of work, however, as paper mills everywhere were going out of business.

Now a resident at Maine Veterans’ Homes - Scarborough, Allan enjoys collecting coins, a hobby he picked up while in the Navy. In fact, he has a collection that features pieces from the different countries he’s visited during his time in the service. He is also President of the Home’s Resident Council and enjoys keeping the minutes of each meeting. He’s proud to consider himself a peer advocate for other residents and takes this job very seriously.

Referring to them as his “heroes” Allan appreciates the Certified Nursing Assistants and the care they provide. But, above all else, he looks forward to the calls and visits from his daughter.

Allan Neff has been named Veteran of the Month at MVH Scarborough for May. Thank you for your service, Allan.

Regardless of branch, any Veteran is eligible for care at the six Maine Veterans’ Homes locations. Whether the Veteran spent a lifetime in the service, like Allan’s father or a single tour of duty, eligibility for residence is possible. For more information, download our free Eligibility Guide >>>