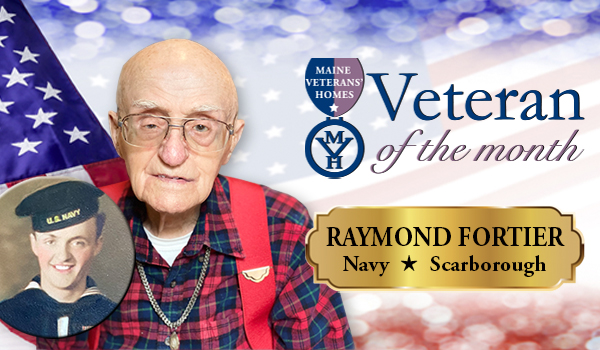 Navy Veteran is Proud of His French Canadian Roots

Raymond Fortier is proud to say that he’s spent most of his 98 years as a resident of his hometown, Sanford, Maine.

Ray’s parents came to the United States from Canada in the early 1900s, not speaking a lick of English but searching for opportunity. After several years in southern Maine, his parents, both mill workers, moved their young family to Woonsocket, Rhode Island, for work. After six years, they returned to Sanford, where the elder Fortiers continued to work in the area’s booming mill industry.

The family settled into the Sanford community and slowly began to adjust to life in the U.S. – including speaking English. French was Ray’s first language, which would later serve him well.

Ray says it was unfortunate when the Great Depression hit.

“Things were pretty hard,” he said, adding that he worked to help the household. “I’m sure there were a few good times, but I enjoyed helping out the family.”

He was especially close to his younger brother, Richard.

“He was an Army man, but I didn’t hold it against him,” Ray said, laughing.

“I lost him a few years back. I sure do miss him a lot – we were pretty good buddies.”

Ray didn’t attend a traditional high school. Instead, he joined the Civilian Conservation Corps, which Congress developed in 1933 to provide jobs for boys and men during the Great Depression. Ray and some of his friends were assigned to work as trail cutters at what would later become Shawnee Peak in Bridgton. They worked from sun-up to sundown, wearing out their work pants and boots.

He recalls one particular weekend off when he and his friends from Sanford hitchhiked from Bridgton to Biddeford; they had to walk the rest of the way home to Sanford.

“At the end of each month, I would send most of my earnings to my folks,” Ray said. “The Corps gave me a lot of experience in many areas. It was where I learned how to drive, along with many other things about life.”

The Military for Ray

In 1942, Ray and his cousin Bobby went to the post office in Portland to enlist in the Navy to serve in World War II.

Ray served from 1942 to 1945. Sadly, his cousin didn’t make it home. Ray looked out for his cousin’s widow, and they still write to this day.

After basic training, Ray served as a gunner on a Merchant Marine ship that transported supplies from weapons and clothes to food. Ray feels fortunate to have met many good friends while in the military, especially a close friend from Bangor.

“We were like brothers,” he said. “We stayed in touch for years.”

As for staying in touch with family while in the service, that was a different story.

“That is one area where the Navy struggled – it was hard to get mail to sailors,” Ray said.

Ray traveled throughout Europe during the service and said his favorite places were all in Italy: the Port of Naples, Port of Bari, and Taranto. He says the military was an excellent experience as he got to see the world and meet different people.

“People were so nice. When they found out I could speak French, holy moly, were they happy!” he said.

After the service, Ray came back home, where he married his wife, Irene, who was also from Sanford. They have three children, Carol, James, and Bobby.

Ray worked in sales for the remainder of his career. He first spent 20 years at the W.D. Grant Department Store and then 24 years selling for Chevrolet. His daughter Carol says business owners in Sanford often tried to poach her father to work for them.

“It was because he could speak French,” she said, adding that it amazed her how quickly he could calculate the price of a car, along with taxes, in French.

“Customers who only spoke French would seek him out,” she said.

French was not only Ray’s first language, but it was also the first language of all three of his children. Carol said it wasn’t until she went to school that she started to learn the English language.

“No one would play with me,” she said, recalling the exact spot where she stood, crying because nobody could understand her.

From right out of the service, Ray was extremely dedicated to local Veteran service organizations. He was commander of the American Legion in 1947 and remained a member for 72 years; he belonged to the D.A.V. for 50 years; and the VFW for 50 years.

Now a resident at Maine Veterans’ Homes - Scarborough, Raymond Fortier has been named June Veteran of the Month. Thank you for your service, Ray.