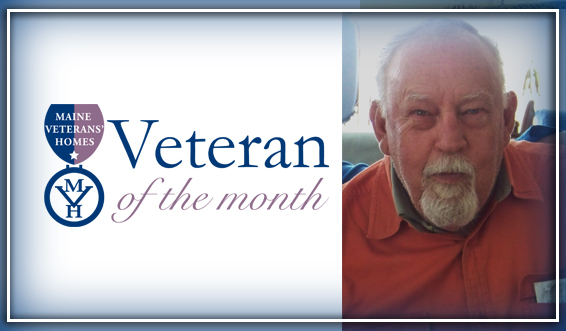 Richard Andrews grew up in Waterford on his parent’s farm where he and his five siblings cared for the cows and chickens. The Norway High School graduate fondly recalls building a cabin in the woods with his brother behind the family farm. He always enjoyed being in the woods and one of his first jobs was as a logger for Richard Jones Logging.

Richard enlisted in the U.S. Air Force on Jan. 27, 1954, and served during the Vietnam War. He attended basic training at Sampson Air Force Base in Seneca Lake, New York and went for additional training at Kessler Air Force Base in Biloxi, Mississippi, for the Morse Intercept Operator Course. Originally stationed at McGuire Air Force Base in New Hanover Township, New Jersey, Richard was then deployed to Rhein-Main Air Base in Frankfurt, Germany.

As a Morse Code operator, Richard’s assignments entailed sending messages to ships about arrivals and departures, inclement weather and the news when a vessel had sunk. Richard said much of the work he did was classified and therefore he wasn’t allowed to talk about it. He spent nearly four years overseas until his tour ended on Jan. 24, 1958. He went on to re-enlist two more times.

His last duty assignment was with the 4238th Civil Engineering Squad (SAC) at Barksdale Air Force Base in Bossier City, Louisiana, where he trained as an apprentice electrician. He also served in the security forces during his time in the Air Force. Richard finished his enlistment on May 25, 1962, after serving for seven-and-a-half years. He earned his Good Conduct Medal while in the service and says that he enjoyed his time enlisted, especially the camaraderie.

The Pursuit of Passions

Upon his discharge from the military, Richard went to art school where his focus was on writing courses. Later in life, Richard was a school bus driver and bus operator for Trailways.

Now a resident at Maine Veterans’ Homes - South Paris, Richard Andrews has been named Veteran of the Month for June. Thank you for your service, Richard.

Whether you’re a Veteran who served one tour of duty or several, like Mr. Andrews, you’re eligible for residence at the six Maine Veterans’ Homes locations throughout the state. To learn more, download our free Eligibility Guide >>>