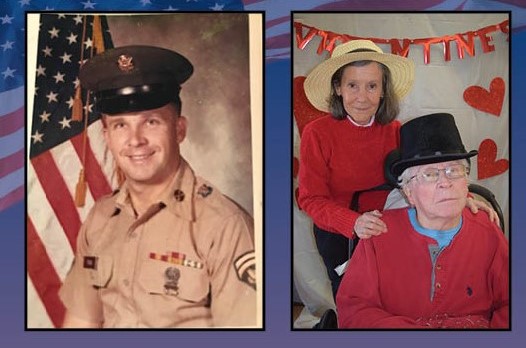 Veteran Meets Love of His Life During Service

Jack and Colette Fogg’s love story began in 1965 when Jack, a young Army man, was stationed at a base in France.

“He was visiting a friend who lived next to my aunt and we had just found this little kitten. Along comes Jack, and that’s how we met.”

Jack, a Naples, Maine native, enlisted in the Army when he was still in high school, satisfying a desire to serve his country in any way he could.

Jack left France in 1966 for Vietnam, where completed to tours of duty. He and Colette remained devoted by keeping in touch through letters.

“My English wasn’t very good, and Jack didn’t speak much French, but we made it work,” Colette said.

Building a Life Together

In 1969 Colette came to the United States and in 1971 Jack proposed before he was to be stationed in Frankfurt, Germany. Colette was eager to say yes and went to Germany with Jack. She very much enjoyed being in Germany for many reasons, including because it was close enough for her to visit her family in France.

The military life in Germany was good for Colette and Jack; they spent 12 years there and she says they were very fortunate there was no crisis at the time that put Jack in danger because of his military service. The two came back to the United States for about eight months in 1974 while Jack was still on military duty. They ended up going back to Germany and that’s where his military career came to an end; he was honorably discharged at the age of 38 at the rank of E7.

After the military Jack ran his own painting and home repair business. They spent time in both southern Maine and Virginia, before ultimately coming back to Maine. Jack also taught himself how to create websites and spent much time in retirement doing that.

Now a resident at Maine Veterans’ Homes - South Paris, Jack is Veteran of the Month for March.

Colette lives nearby and visits Jack everyday and is just as devoted to him today as she was when they first met. Just last month the couple celebrated their 49th wedding anniversary.

Thank you for your service, Jack.

While Colette doesn't need nursing care right now, in the future, she could be eligible for residence at any of the six Maine Veterans' Homes; spouses and Gold Star parents are eligible for care here. To learn more, download our free Eligibility Guide >>>