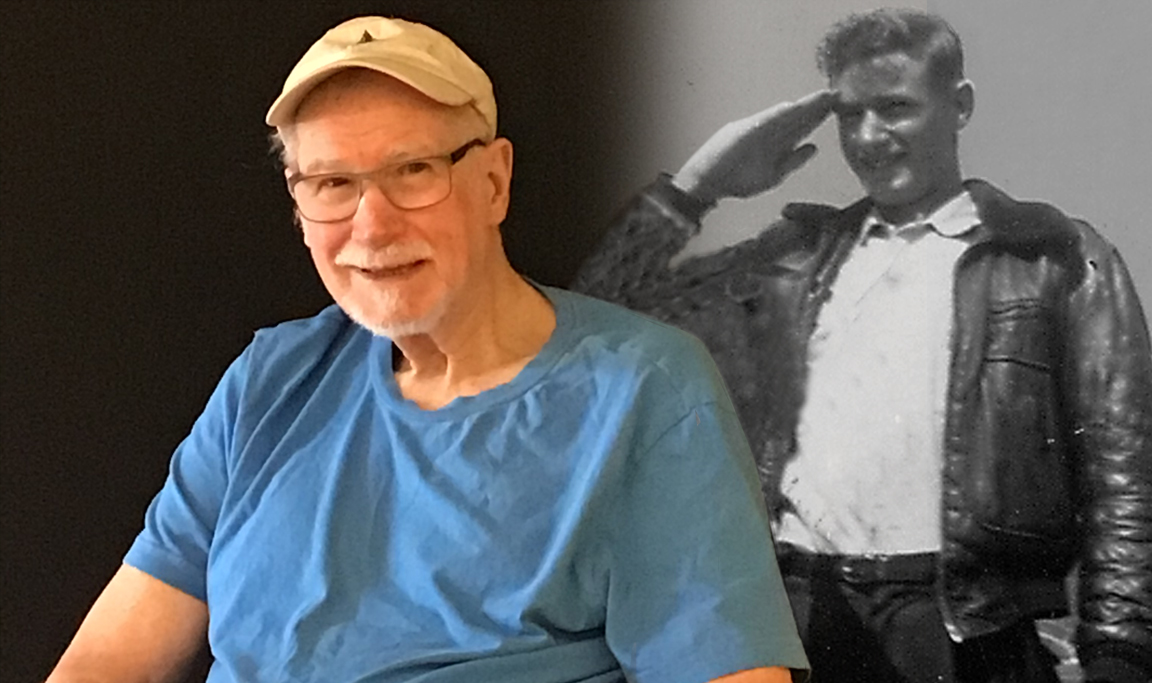 Born in Stony Point, North Carolina, Max Ashburn is the oldest of four children in the Ashburn family. His parents were loom fixers in area cotton factories and as Max got older, he worked in the cotton fields, which was very hard work, he said.

In his youth Max was a member of the local 4H Club and Future Farmers of America. His hobbies include music and art – he played guitar and mandolin in a bluegrass band and loved to draw.

“Drawing used to get me in trouble,” Max said, adding that his desire to create art was so strong that he used to draw on the walls.

“Then my parents started giving me paper to draw on,” he said, laughing.

In high school Max worked at a furniture factory where he graduated from installing mattress springs to doing upholstery work. In 1954, he enlisted in the Marine Corps and earned his GED while in the service.

Max Plays with the USO

Max served as a radio operator and trained at Parris Island, Camp Lejeune and Camp Pendleton.

“We did a lot of cold weather training in the mountains of California because of the Korean War. Peace talks were happening, but the government still wanted to make sure we were trained,” he said.

Max shared his musical abilities when in the service and toured with Bob Hope’s USO shows. He played at hospitals, orphanages and even a leper colony.

Max visited many different areas of the world during his four years of service. His favorite place was Japan.

“It was a beautiful place and there were a lot of artists whose work I got to view,” he said.

After his service to our country, Max enrolled in art school in Treasure Island, California. A local detective inquired to school officials in search of a student who might be able to complete some witness sketches, so Max volunteered.

“It turned out well. They caught the guy and I kind of got the bug for police work,” he said.

Max found himself traveling to Maine to visit a buddy from the Marine Corps. At the same time, he looked for openings in area police departments.

“I applied and did well. I was able to combine police work and artwork because they wanted me to do their composite sketching. I was fortunate to have been able to do this,” Max said, adding that he worked for Lewiston Police Department, the Androscoggin Sheriff’s Department and even the FBI. He was often “loaned out” to other towns by the police organization he worked for to do composite sketching. Eventually, he said, computers took over his job.

“During my last five years in law enforcement I took transparencies and built composite faces with those. That was interesting, but I preferred drawing,” he said.

When Max worked for the sheriff’s department, he was in charge of the youth bureau, which offered him the opportunity to go to area schools. He did puppet shows, karate, drawing and other kinds of entertainment to help educate children on the department’s role in their community.

After he retired from law enforcement, Max volunteered at children’s hospitals where he would sketch for the young patients waiting for treatment. He also sketched cartoons for area newspapers and wrote poetry.

Now a resident at Maine Veterans’ Homes - South Paris, Max continues to draw. He also enjoys playing guitar, harmonica and keyboard. Max Ashburn has been named Veteran of the Month for November at MVH South Paris. Thank you for your service, Max.