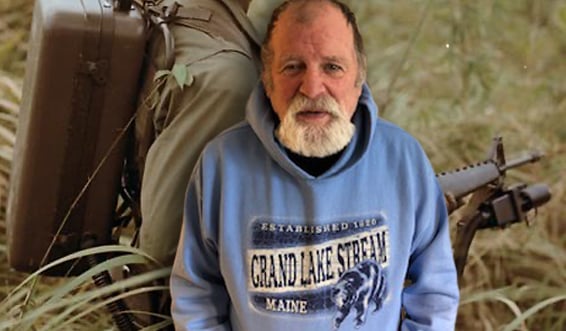 Michael Earl Cochran, born in Yoakum, Texas on Sept. 28, 1948, to Earl Cochran and Anna (Gould) wouldn’t spend much time in the Lone Star State. His mother served her country in her own way by singing and dancing in the USO. After Michael was born, she returned home to raise her one and only child.

Mike grew up in Grand Lake Stream and graduated from Woodland High School in Baileyville in 1967.

After high school he enlisted in the Army and served three years. He completed basic training in Fort Leonard Wood, Missouri. From there he went to Fort Gordon, Georgia, for Advanced Infantry Training and then to Fort Lewis, Washington, where he was a drill instructor.

Mike went to Vietnam, specifically Bong Son, where he spent two years. His job was to operate a personnel detection machine, the first version of which was called the XM2 personnel detection manpack. This was a backpack sensor with an air intake tube mounted on the end of a rifle. It would detect ammonia, which is produced by human sweat. Mike said he and other men in his unit later found out that these devices didn’t work well. There was confusion about who was producing the ammonia – was it from the soldier or the enemy? The sensors were eventually put on helicopters and deemed to be more accurate.

Back Home in Maine

Mike returned to Maine after his service to his country where he was reunited with his high school sweetheart, Pam Gaddis. Mike married Pam, his first and only love. They have two children, Ben and Lindsay, as well as three grandchildren.

As for a career after the military, Mike worked at a fish hatchery for the Maine Department of Inland Fisheries and Wildlife for a few years. He then ran heavy equipment for Georgia Pacific.

Now a resident at Maine Veterans’ Homes - Bangor, Michael Cochran is Veteran of the Month for June. Thank you for your service, Mike.

All six Maine Veterans Homes locations throughout the state not only offer long term and skilled nursing care, but they offers respite care for your loved one. Read more about the benefits of Respite Care >>>