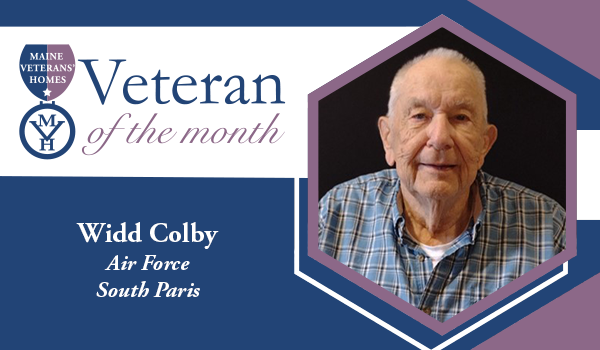 Widd Colby was born in Upton, Maine, and grew up on a farm on Rumford Point with his brother and sister. He attended Rumford Point Elementary School and Stevens High School. He enjoyed playing in the woods while growing up and hunting and fishing when a little older. In the wintertime, he was an avid cross country and downhill skier. However, his responsibilities working the family farm kept him from most other activities. Running the family dairy farm was the priority, as twenty cows needed milking twice daily, beginning at 5am.

He enlisted in the Air Force in 1954, after marrying his "partner" Joann, who he affectionately nicknamed "Jo," in 1953. They met while still in school, introduced by her brother. He attended basic school in Denver, CO, and advanced radar instruction followed at the 8th Air Force headquarters, located in Westover, MA at the time.

Working on B52 radar systems, he never saw combat, but did travel overseas to England. He remembers a particularly harrowing trip that required diversion to Iceland due to engine failure. Fortunately, the crew landed safely with only two of four engines operating as the plane battled icing conditions. He wrote to Jo whenever he was away, sending letters telling her how much he loved and missed her.

Working on the "big planes" eventually saw the family stationed at Loring Air Force Base, near Limestone, Maine, which was the Strategic Air Command at that time. Widd, Jo, and their three children, two daughters and son, were also stationed in Maine, Massachusetts, and Puerto Rico throughout his service career.

Anyone who has worked in the military knows that there are frequently times that require waiting. Widd and Jo experienced some "high alert" waiting with their three children at home while stationed in Puerto Rico during the Cuban Crises, which was thankfully avoided.

"It was a good life," Widd says, and that for him, the best part of the military was the planes, which still interest him today. After 9 years in the service, the couple returned to civilian life, supporting their children's education. They are pleased that each of their three children graduated from college.

Widd worked as an electrical technician on paper mill machinery for Boise Cascade on-site at the Rumford Paper Mill in Maine. He also worked for Reliance Electric in both Minnesota and Wisconsin. He briefly returned to farming while living in Florida, managing a beef herd, and also helped a friend from church who kept cows in 2011 and 2012.

Wanting to be closer to their children, Widd and Jo moved home to Maine in 2013. They enjoy family gatherings, jigsaw puzzles, baseball, football, and going out for ice cream in the MVH van.