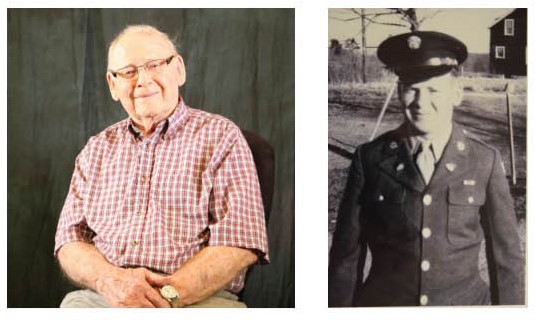 George Kimball was 19 years old when he went into the military. It was Feb. 26, 1943, battles were erupting throughout the world and in the United States, rationing of meat, cheese, butter and cooking oils were in full effect.

George had grown up in Haverhill, Massachusetts, in a very loving and Christian home where he enjoyed playing baseball and football and spending time with his parents, two brothers, and one sister. He attended a local high school and trade school, which prepared him for his first job in auto-electrics.

After hearing about Pearl Harbor and the progress of the war, George thought he would enlist and get mechanical training so he could support the troops that way.

“The Army had other plans for me,” he says.

Private First Class Kimball was given a few months of jungle training before he went to the Aleutian Islands. The Japanese must have known George was coming over because they retreated before he arrived.

He was then sent stateside to receive more training before joining the 317th Infantry, part of General Patton’s legendary regiment. He was stationed close to the Luxembourg border where he suffered injuries from shrapnel and trench foot. George and other soldiers crossed a river in France, carrying their guns over their heads so they didn't get wet.  They then spent three or four days in foxholes dug in the bitterly cold and rough terrain, snow on the ground all around them.

George’s feet froze and he was diagnosed with trench foot, a painful condition caused when your feet are immersed in cold water or mud for long periods of time. The injuries kept him in a hospital in England for months and prevented him from going with his outfit to the Battle of the Bulge.

After the military, George married Donna Mae and they had a daughter, Janet, and son, Tom. George and Donna Mae were married for over 60 years. They spent time in Haverhill and Florida and frequently visited their camp in Bridgton. George has a granddaughter, grandson and great-granddaughter.

A resident at Maine Veterans' Homes - South Paris and August Veteran of the Month, George likes to be active in retirement. Among his favorite hobbies are singing, fishing, camping, dancing, traveling and swimming. Thank you for your service, George.

Maine Veterans' Homes is an independent, nonprofit organization serving our Veterans and their families. Learn more about our mission.